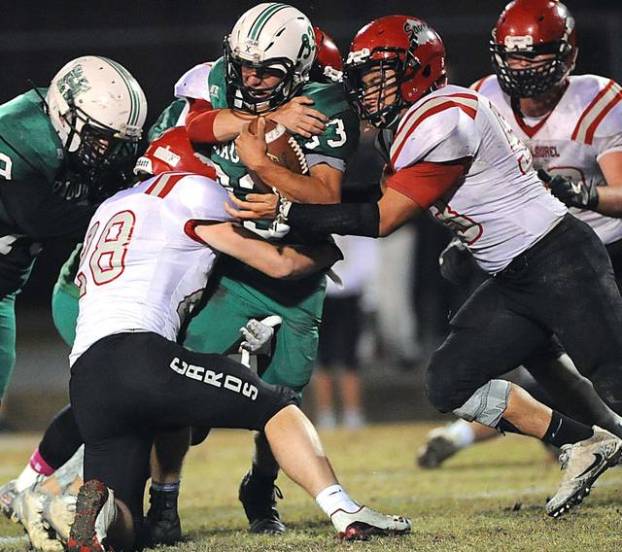 Harlan running back John Brady Brock was surrounded by South Laurel defenders as he battled for extra yards in Friday’s game. Brock and the Dragons travel to Pikeville on Friday for the first round of the Class A playoffs.

While their 5-4 record isn’t that impressive and not what you might expect from a Pikeville team only two years removed from a Class A state title, don’t be fooled that this year’s Panthers aren’t capable of a deep postseason run.

“They are well coached and athletic. They have some good looking kids. They aren’t quite what they were when they went to the state championship, but that’s not to say they aren’t a good football team,” said Harlan coach John Luttrell, whose Dragons play at Pikeville on Friday in the first round of the Class A playoffs. “

Pikeville began the year with a 51-14 win over Covington Holy Cross before losing four straight games against brutal competition, falling 49-21 to Lexington Christian, 28-0 to Paintsville, 56-13 to Belfry and 38-26 to district rival Hazard. The Panthers followed with four straight wins going into Friday’s game against Harlan, beginning with a 42-6 win at Calloway County, followed by a 43-6 district victory over Phelps, then a 41-13 win over Grundy, Va., and a 54-12 victory over Tolsia, W.Va.

“I think we’ve grown up a little bit. Experience has helped some,” Pikevile coach Chris McNamee said. “But a lot of it is we played some really good teams early. The level of the competition hasn’t been quite the same, but we have played better. Getting some game experience helped. We also had to move some people around and got them in the positions to help us most.”

“We made a move at quarterback in week four, and Conner has done a really good job there,” McNamee said.

Other leaders on offense for the Panthers include sophomore receiver Jackson Hensley and junior tailback Zack Roberts.

“I think they got a couple of kids back. They’ve changed quarterbacks, and he’ s a pretty good athlete who runs well and throws pretty good,” added Luttrell.

Harlan (3-7) has been led on offense by junior tailback John Brady Brock, with 655 yards rushing. Senior fullback Kendal Brock has 308 yards. Junior quarterback Kilian Ledford has passed for 472 yards and ran for 176.

“They’ve always had good size, and their quarterback has good speed and does a good job,” McNamee said. “They do a lot of the things that (former coach) J.B. (Donahue) did. They do a lot of things on offense, which could be a problem for us.”

Ledford leads the defense with 84 tackles. Braydon Shanks and Ethan Clem are tied for second with 51 tackles each through nine games.

“We have to tackle well and do a better job of that,” Luttrell said. “We also have to finish drives. We’re starting to move the ball a little bit, but we have to finish. I think if we can move the ball and finish drive that it’s a winnable game. Playing on the road is tough, but we’ve actually played a little better on the road than at home this year. That may have something to do with opponents, but we’ve fared better on the road. We have to play a mistake-free game and take care of the football. If we can do that and not let them big-play us we can put ourselves in position to win the game.”

While the Panthers are again among the regional favorites, along with Hazard and Williamsburg, McNamee knows this year’s team can’t afford to look ahead.

“This year we have to focus one game at a time. We have to put everything in to Harlan because they have a good team and are capable of coming up here and beating us,” he said. “We have to mentally ready to play Friday.”

For two schools separated by 110 miles, Harlan County and Pulaski County seem to find their way to each other... read more