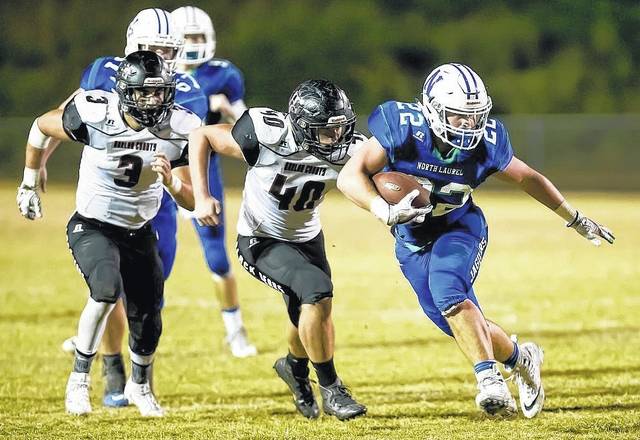 For two schools separated by 110 miles, Harlan County and Pulaski County seem to find their way to each other just about every November.

The postseason rivalry between the two will be renewed Friday when Harlan County travels to Somerset for the first round of the 5A playoffs as the Black Bears will take on the difficult task of ending Pulaski County’s four-run run as Region 4 champs. The Maroons have advanced to the state finals each of the past four years, including winning a state title in 2015. Pulaski County started its run to a state runner-up finish last year with a 14-12 win over the Bears after defeating HCHS 26-14 to open the regular season.

“I think both teams should be confident as far as knowing the other team,” Harlan County coach Eddie Creech said. “I think we left there last year both times thinking we should have won the game, but we didn’t. We talked a lot in the preseason about getting over the hump and finishing games. We know that’s something we have to do Friday.”

Harlan County has had its shared of success against the Maroons, defeating Pulaski County to win regional titles in 2010 and 2012. The Bears also had a first-round win in 2011, but none of the playoff wins were on the road.

Pulaski County (4-6) hasn’t been quite as strong this year with heavy graduation losses and a tough schedule dropping them to second in District 7 behind regional favorite Southwestern. Quarterback Wiley Cain has been the Maroons’ most consistent offensive threat, passing for 2,562 yards and 20 touchdowns. Cain has been slowed by a shoulder injury of late and was replaced recently by tight end Matt Hendricks, who is second on the team with 50 receptions for 637 yards, behind Jake Sloan and his 73 catches for 936 yards. Freshman Kaleb Adams has also seen action at quarterback and is expected to start against the Bears.

“It’s been a bit of a frustrating season, and not because we’re playing a lot of young players,” Pulaski County coach John Hines said. “We don’t feel we’ve reached our potential this season. We think we could have done a little better. We’ve looked really good at times and really bad at others. We’ve been inconsistent all season. If we could get that ironed out, we could be pretty good, but we’re running out of time.”

Harlan County (5-5) has been led on offense by seniors Tyrese Simmons and Quintin Mickens, who have rushed for 655 and 648 yards, respectively, scoring eight touchdowns each. Junior quarterback Colby Cochran has passed for 758 yards with senior Devon Rodrigues leading in catches with 36 for 411 yards.

“I think it starts with the offensive side of the ball,” Creech said. “We were down there twice last year and only gave up two touchdowns in each game. We were unable to score more than 14 ourselves. We had some long drives we were unable to punch in the end zone. We have to go down there and score some points.”

The Harlan County defense, led by linebackers Garry Henson and Caleb Carmical, with 95 and 89 tackles, respectively, has allowed 14 points or less in their four wins over the past five games.

“I think this is one of the best teams they’ve had,” Hines said. “It’s a senior-dominated team with a lot of experience. Mickens and Simmons and those guys have been playing so long. It’s a very good team that may rival some of the great teams from a few years ago with coach (Tom) Larkey.”

The Bears will be without freshman linebacker Kobe Burkhart, who suffered an injury in last week’s win at Bell County, but senior linebacker Christian Hall is expected back after missing several weeks due to a suspension.

Green excited about signing with Cats