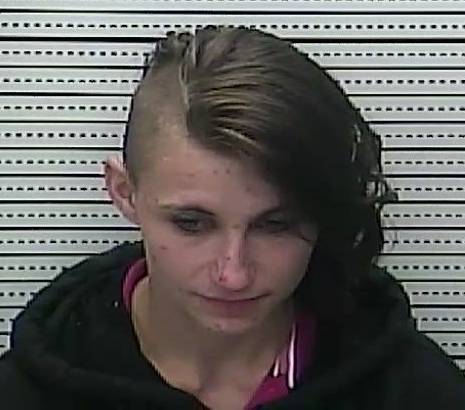 A Lexington woman is facing charges including possession of methamphetamine and resisting arrest after police allegedly found her in possession of the drug.

According to the citation, Wilson initiated a traffic stop for expired registration on a vehicle in which Wilkie was a passenger. Police received consent to search the vehicle, and Wilkie was asked to exit the car. Upon exiting, Wilkie allegedly became verbally combative to the troopers. Police found a measuring spoon inside a plastic baggie with white residue inside the passenger door where Wilkie was sitting. A purse containing a small clear plastic baggie was located. Wilkie told police the purse belonged to her. The baggie contained a substance believed to be methamphetamine. When police informed her she was under arrest, Wilkie allegedly began kicking, cursing and screaming, hitting Wilson in the upper leg and on his gun belt. The citation states that she allegedly bit Wilson’s left hand, breaking the skin. Trooper Brandon Burton assisted, and Wilkie was placed in handcuffs. Wilkie reported she did not know the meth in the purse. She advised police she was a methamphetamine user.

Wilkie was charged with first-degree possession of a controlled substance, disorderly conduct, menacing, resisting arrest, third-degree assault on a police officer, possession of drug paraphernalia and tampering with physical evidence. She was lodged in the Harlan County Detention Center.

According to the indictment, Penny allegedly used his computer to send nude photographs of a minor on Aug. 1, 2016. A separated indictment states Penny was in possession of methamphetamine, buprenorphine, clonazepam and marijuana on or about April 29.

Penny was indicted for prohibited use of an electronic communications system to procure a minor or peace officer posing as a minor to commit a sexual offense, distribution of obscene matter to minors, first- second- and third- degree trafficking a controlled substance and possession of marijuana.

Penny was lodged in the Harlan County Detention Center;

According to the arrest warrant obtained by Hensley, Overbay engaged in sexual intercourse with a person incapable of consent on Oct. 21.

Overbay was charged with third-degree rape and lodged in the Harlan County Detention Center;