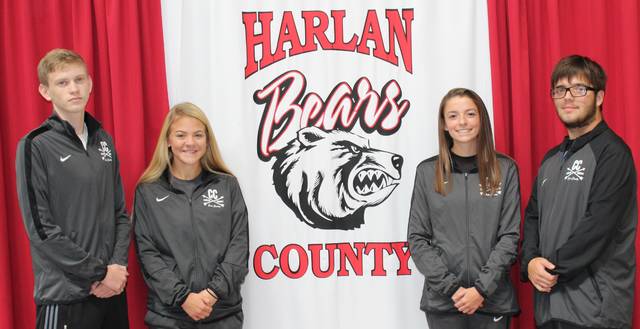 When the Harlan County cross country squad reports to practice next July, they will be 23 years of experience lighter — with most of that experience coming from the two runners who have run more varsity races for the Black Bears than anyone else in school history.

Senior Breezy Epperson has been with the program since she was a fourth-grader and has been a varsity mainstay since her seventh-grade season.

“You can’t think of girls cross country at Harlan County without thinking of Breezy,” said Harlan County coach Ryan Vitatoe, who is wrapping up his 10th season at school. “She’s been with me since the second year of the program and has had tremendous success at the elementary and high school level. She’s always been a team player and has done whatever is necessary to help us be successful, even sacrificing her junior high years to run varsity.”

Epperson was the only non-senior on her first varsity squad, which also included her sister, Miranda, now an assistant coach for the team after a successful college career at Union (Ky) College.

“Cassidy Ball and Miranda really helped me in the transition from running elementary to varsity,” she said. “Cassidy and I ran Ivy Hill I don’t know how many times that summer.

That girls team won the second regional championship in program history. The squad faced a bit of a rebuilding challenge the following season, with Epperson thrust into a leadership role despite her youth.

“I had plenty of great leaders to watch and learn from (in 2012),” she said. “We all held each other accountable that year, and I knew that in the following year I would have to try to do the same with all of the new faces. So the leadership role just came naturally. It was a little tough for me at times because I was so young, but I do think that the 2012 team left their mark on me, especially when it comes to my leadership style.”

Epperson has now been part of two regional championship squads, as the Lady Bears nabbed another in 2015, and last year’s runner-up finish. Like much of the rest of the girls squad, she got off to a bit of a slow start this season, but Vitatoe said Epperson’s midseason renaissance sparked the team’s resurgence.

“There’s no doubt our improvement as a team this season began with her improvement. We go as she goes, and she’s done an amazing job modeling the right practice and race habits it takes to be successful for our young girls,” he said.

Epperson has also had her share of success off the course as part of the school’s Community Problem Solving team, which has advanced to the international competition three straight years and placed twice. She plans to become an engineer.

“It’s going to feel very odd to not put on the Harlan County uniform next year. I’ve been here almost a decade, and it’s become a huge part of my life,” she said. “I am who I am today thanks to the cross country program.”

Like Epperson, Alex Lewis has been a varsity runner since his middle school years, moving up as an eighth-grader in 2013 after the boys squad was also hit hard by graduation.

“Alex has made incredible contributions to our program in his five years of varsity cross country,” Vitatoe said. “He stepped in as an eighth-grader and never looked back.”

Lewis was eventually called upon to be a leader as a sophomore following the graduation of Steven Engle and initially resisted the idea of being outspoken.

“I think it was a matter of getting acclimated to that position,” he said. “When Engle graduated, I was more of a lead-by-example person, I guess, but as I’ve gotten older, being vocal has come easier.”

Lewis has commanded a squad that won back-to-back regional championships in 2015 and 2016 and has experienced his greatest personal success this season, breaking the 18:00 mark twice – only the fifth runner in school history to accomplish that feat. (Josh Lee joined him in that club later in October.)

“His successes this year have come from his steady growth as a leader in the last few seasons. He’s worked so hard to get to the next level this year, and I’m very proud of him,” Vitatoe said.

As he moves on to Morehead State University to pursue an aerospace career, Lewis is confident about the future of the program he has helped build.

“It isn’t going to feel normal (not being there),” he said. “I’ve grown up in the sport, and it is everything I know, year-round. As for the state of the program, we were short on numbers and we are really young. If kids just recruit a little, the numbers can grow easily, and I’m sure Josh, Caleb (Brock) and Zack (Carmical) will step up into the leadership role and do just fine with the younger base of runners we have.”

Outside of the two veterans, perhaps no one on the team has epitomized hard work like Laura Creech since she joined the program as a sophomore.

“I can’t say enough about Laura’s work ethic,” Vitatoe said. “She came into this sport three years ago, having never run before, and she has transformed herself. She’s run varsity this season on multiple occasions. She’s an incredibly hard worker, and this program is better because of her.”

Creech admits she wasn’t sure she wanted to stick with it after her first practice back in 2015.

“My feelings have changed considerably,” she said. “The first day of summer practice, I thought it sucked. I was nervous that day, but I came back the next day and it wasn’t as bad.”

Creech, whose future plans include a career in criminal justice, said it’s been gratifying to see her hard work pay off with new opportunities this year.

“I feel great, because when I first started I was the slowest runner on the team. To see where I am now is just wonderful because it shows that hard work pays off.”

If Epperson, Lewis and Creech are the heart of the program, Andrew Crawford makes up a huge part of the soul of the Black Bears.

“Andrew is one of the most consistent and enthusiastic kids who’s ever run for me,” Vitatoe said. “He’s run one varsity race in his career, yet he brought a level of commitment to his team unlike any I’ve seen in my 15 years of coaching. He’s a great teammate, a great kid, and he’s made a great contribution to our program.”

Lewis, one of Crawford’s closest friends on the team, agrees.

“Andrew, for every race I can remember, is there with us as we are on the starting line before the race,” he said. “He leads us in prayer and always gives us a motivational speech. Even though he isn’t actually running that race and could be focused on how he will run or did run, he seems to care about our performance as much as us. He is a huge morale booster and great person to have around.”

Crawford, for his part, insists that he’s received even more from the program than he’s given.

“It’s been an amazing four years running, whether it was cheering on my teammates or them cheering me on,” he said. “It’s been a great experience.”

Crawford’s dedication culminated in a special moment earlier this season. When illness left the team with a varsity spot open for the Black Bear Invitational/Area 9 championship meet in late September, Vitatoe knew exactly who to pencil in as a replacement.

“Andrew has worked so hard for us the last four years, there’s no doubt in my mind he earned the opportunity to chase that title with his brothers,” he said.

“It’s crazy to think that I’ve improved as much as I have,” said Crawford, who plans to pursue a career in physical therapy. “I’ve been blessed to have such great coaches and teammates these past few years.”