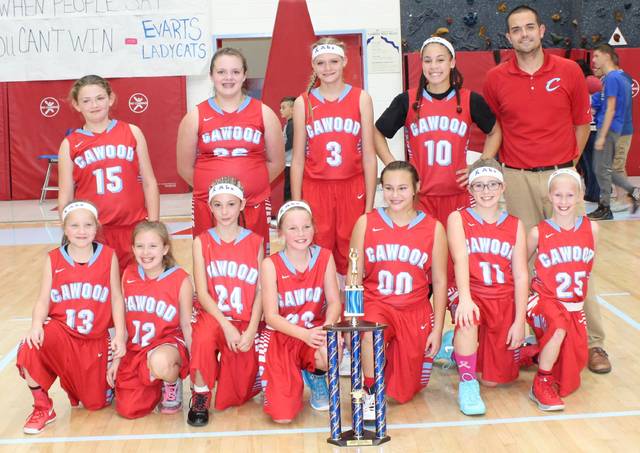 With a James A. Cawood defense focused on stopping star guard Kylie Noe, the Cawood Lady Comets needed big games from other sources to complete a perfect season.

Abbi Fields and Kaylee Clark accepted that challenge, scoring 19 and 10 points, respectively, as Cawood (21-0) was able to overcome a rare off night by Noe to win 40-37 in the fifth- and sixth-grade county tournament finals Thursday at James A. Cawood.

“Kylie leads us in scoring, but we’ve had kids step up all year,” Cawood coach John Middleton said. “Clark hit some big shots to settle us down. Abbi went in and battled and got us some big baskets early. I thought that gave us some confidence.”

Cawood struggled to a 6-4 lead after a sluggish first quarter before the Lady Comets’ offense came alive in the second quarter with the help of Clark, who hit four shots and helped push the margin to 21-8. Davis and Jones each scored to cut the deficit to 22-13 at the half.

Fields and Davis led their respective teams with six points each in the third quarter as Cawood took a 32-21 lead into the final period.

Another basket by Fields gave Cawood a 34-22 lead with 4:50 left, which was just about the time the Trojanettes fought back with their defense. Karst ignited a 12-0 run with a pair of 3-pointers. A basket by Skylar Shepherd with 2:12 left pulled JACES even.

Noe hit one free throw and Cheyanne Rhymer connected on two to end the drought. Cawood went back up by five before a basket by Jones pulled the Trojanettes back within two. Fields hit one of two at the line with 19.6 seconds left to make it a three-point game. JACES turned the ball over in the closing seconds on their final possession.

“I think we tried to rush a little,” Middleton said. “They did a great job defensively. Their guards hurt us last year and put us out in the semifinals.”

Cawood struggled against the JACES press and also had a hard time at the free throw line to aid the comeback.

“I think this atmosphere got us a little confused,” Middleton said. “We found a way to win, and I’m proud of them.”

After finishing third the past two seasons, Cawood rolled to a championship this season with 21 wins in 21 games.

“To see where these girls came from three years ago is amazing,” said Middleton, who is in his third season as coach. “We work 10 months a year. They put in so much time. This is the best group you could ask for, and I’m happy for them.”

Evarts raced to a 10-2 lead after one quarter, with the help of two 3-pointers and three baskets by Alexis Freeman, on the way to a 31-20 win over Wallins in the third-place game.

Ashley Preston took over in the second quarter and finished with a team-high 11 points to lead the Lady Cats.