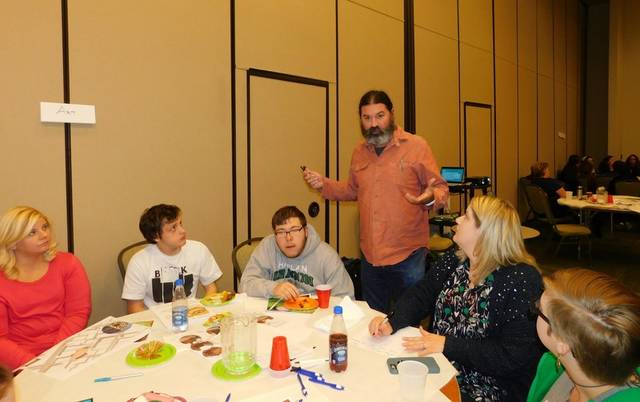 Jay Becker, of MKSK, spoke with the arts and crafts table about various options of displaying and marketing arts and music. The room was divided into sections during Tuesday’s meeting, with community members choosing which table of discussion in which they were interested and which subject more suited their needs. The subjects of discussion included the selling of alcohol beverages and food, arts and crafts, marketing, programing, and site and prep.

A community meeting was held Tuesday to discuss numerous possibilities for the use of an 80-year-old, 30,000 square foot, three-story building located in downtown Harlan, which has been gifted to a coalition formed by the Harlan County Community Foundation, COAP, Inc., and the Appalachian Program at Southeast Kentucky Community and Technical College.

The old Belk building located at 118 East Central Street was the focus of the meeting, prompting many local and out-of town people to share input and ideas on what would be the best option for the use of the building, including a business incubator for small, local-based businesses and merchants.

The first meeting concerning the building was held in late September after a $600,000 ARC grant was awarded to the Appalachian Program at SKCTC. The second meeting brought together community members and leaders to discuss possible ideas for the building with the biggest majority of the building’s function being dedicated to education and workforce development.

Business ideas discussed included the marketing of food and alcohol, arts and crafts, and entrepreneur adventures, with the idea of bringing more business to Harlan as well as beautifying the city with the renovations of the building.

Project organizer Robert Gipe, of SKCTC, said by the end of the project’s three-year planning process it will make Harlan a more beautiful area and more desirable for business investors.

Carrie Billett, of COAP, Inc., said the meetings were a joint effort of the coalition designed to allow the community’s input on ideas of what route to take with the use of the building, citing that it will be a huge opportunity for the area to grow in economics.

A landscape architecture, urban design, and planning team from MKSK, of Covington, was brought in during Tuesday’s meeting to give input as to possibilities for the development and process of the building as well as possible surrounding areas to be incorporated into the project.

MKSK spokesperson Senior Associate Joe Nickol displayed several slide shows of other old buildings in various parts of the Appalachian area that have been converted into workable structures by MKSK, with the help of the communities.

Nickol said many small towns such as Harlan are rich with heritage and tradition that could serve as an asset for bringing in investors and other business ventures from outside areas of the country, as well as allowing local people to display their culture to the world through the displaying and marketing of their art, foods, and music.

“We observed that this area has food, art, and song that some people have never experienced before,” Nickol said. “A lot of people share their stories about our culture here as passed down through the recipes and through the art we share with one another, in the songs that we write….our trials, our successes, our joys, what frustrates us.”

Tuesday’s meeting was solely for the purpose of bringing the community together in discussion about the use of the building, therefore no definite plans were made. However, another meeting is scheduled for November 10 and everyone is urged to attend with input and ideas.

The dark side of disability