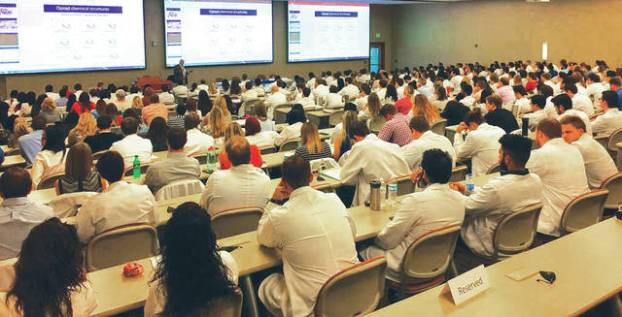 The symposium was designed to prepare LMU health profession students who will soon enter clinical training and future residencies where they will encounter patients exhibiting drug seeking behavior and patients addicted to these medications.

The event featured John Temple, author of American Pain. In his book, Temple tells the story of how the current opioid epidemic began with two felons who were twin brothers that made millions from a gigantic south Florida pain clinic that sold opioids to addicts.

“Whenever I get a chance to talk to medical students I feel like I am really making an impact because if you develop your own ideas and ways of handling this, it’s really going to be up to you to figure out where to go next,” Temple said.

The symposium was required for LMU’s second-year osteopathic medical students, first-year physician assistant students and nurse practitioner students. It was also attended by several social work students, and was open to additional classes via live stream. The objectives of the symposium were to introduce students to the widespread control drug misuse problem in the local and national regions, help students recognize misuse in patients and self, help students recognize substance use disorders as a chronic disease and identify best practices for preventing control drug misuse and non-prescription drug treatment options.

The afternoon session focused on addressing the problem from an inter-professional perspective. Sharing the osteopathic physician perspective was Walter Ehrenfeuchter, DO, professor and director of neuromusculoskeletal medicine and osteopathic manipulative medicine (NMM/OMM) at the Philadelphia College of Osteopathic Medicine.

“Opiates are a double edged sword. We need them for acute care, emergency and post-op; but they are a curse because of the potential for addiction, but we have no other alternatives,” Ehrenfeuchter said. “Pills are easy. Osteopathic manipulation, acupuncture, exercise therapy, physical therapy, are all more time-consuming, more expensive, and a bigger commitment for the physician and the patient.”

Certified NMM/OMM physicians like Ehrenfeuchter, are well versed in many forms of Osteopathic Manipulative Treatment (OMT) where the hands are used to diagnose, treat, and prevent illness or injury. The treatment can be used to ease pain, promote healing, and increase overall mobility. When appropriate, OMT can complement, and even replace, drugs or surgery.

Ehrenfeuchter said, “We are seeking alternatives that cause the least harm and have the most potential for good, and I personally think osteopathic manipulative medicine fits into that category.”

CDC data shows opioid abuse is more prevalent in southern states. Tennessee is ranked among the top three states in the nation with the highest painkiller prescription rate. In Tennessee, from 2014-2015, there was a 12.8 percent increase in drug overdose deaths from opioids. In 2014, 1,263 people in Tennessee died from overdose (the majority of them from opioids) and Tennessee recorded 1,031 cases of infants born with neonatal substance abuse caused by in utero exposure to opioids; twice the national average.

Stacey Maltman, FNP-BC, talked about treatment from the nurse practitioner’s perspective. Maltmann, who earned two nursing degrees at LMU, an Associate of Science in Nursing and Master of Science in Nursing at LMU, is an active member of the National Association for Alcoholism and Drug Abuse Counselors (NAADAC).

Other speakers included Dr. Kenneth Trzil, assistant professor of internal medicine at LMU-DCOM and Richard Gillespie, MD, a member of the LMU Board of Trustees. Sharing the physician assistant perspective was Natalie Wilbanks, PA-C, a family practice provider at Dayspring Family Health Centers in Jellico, Tennessee.

Joseph Bardinelli, DO, an LMU-DCOM alumnus from the class of 2016 shared his perspective from working as a resident. He said, “If you can go into your rotations knowing this is the epidemic of your career it will put you way ahead of your colleagues.”