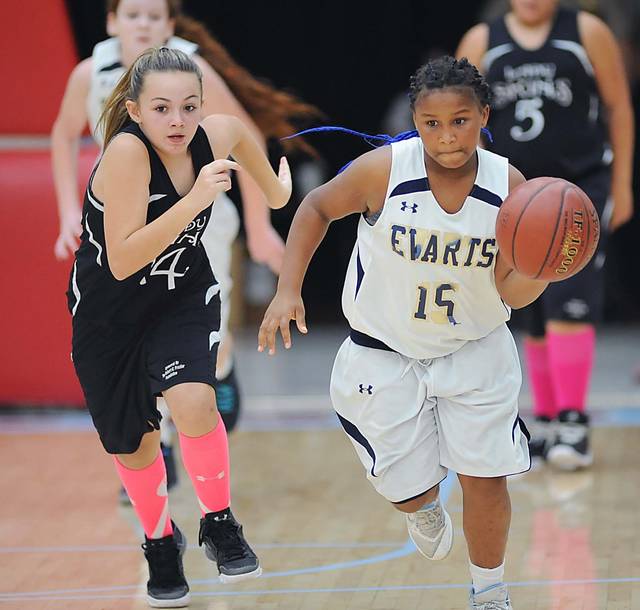 Evarts’ Drucilla Brown raced down the court in county tournament action against Cumberland. The Lady Cats fell to Cawood in the semifinals on Tuesday. Cawood and James A. Cawood will meet in the championship game on Thursday.

One win away from a perfect season, the Cawood Lady Comets rolled into the fifth- and sixth-grade county championship game with a 31-7 rout of Wallins in the semifinals Tuesday at James A. Cawood Elementary School.

Kylie Noe scored 14 points and Abbi Fields added 10 for the 20-0 Lady Comets, who raced to a 17-0 lead after one quarter behind eight points from Noe and four from Fields. The lead grew to 31-1 at halftime as Noe and Clem each scored six points.

Wallins, led by Faith Caldwell with five points, outscored Cawood 6-1 in the second half.

James A. Cawood has the last chance at stopping Cawood, earning a spot in the championship game with a 31-8 win over Evarts in Tuesday’s nightcap.

The Lady Cats stayed close for a half, outscoring JACES 6-1 in the second quarter to pull within five, at 13-8, at halftime.

The Trojanettes held Evarts scoreless in the second half, pulling away behind guards Ella Karst and Kylie Jones and forward Leah Davis. The trio combined for all 12 JACES points in the third quarter as the lead grew to 25-8 at halftime.

Cawood will battle James A. Cawood on Thursday at 7 p.m. in the county championship game. Wallins will take on Evarts at 5:30 for third place.

Morris ready to become a leader