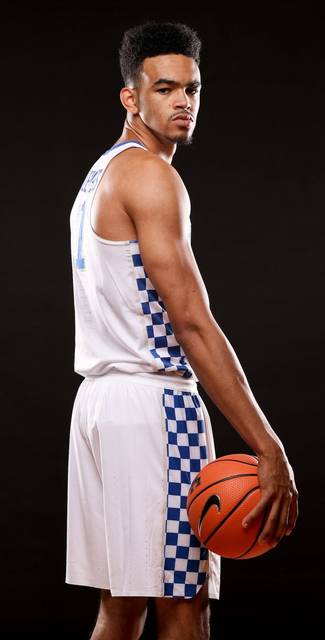 Sacha Killeya-Jones is ready for a breakout season with the Wildcats. Jones struggled last season and played in just 15 games.

LEXINGTON (KT) — Everything didn’t go as planned for Sacha Killeya-Jones last season. He expects things to change this year.

“The Sacha now would enjoy playing against the Sacha last year,” he said.

Although Jones was a five-star recruit and McDondald’s All-American last season, Jones slipped below the cracks and played in just 15 games, averaging 2.7 points and 2.1 rebounds per game. Jones, the youngest player on last year’s team, recently turned 18 and is ready for what he hopes is a breakout campaign.

Jones said the biggest thing he learned from last year’s disappointing start to his college career was to “go hard all the time” and be patient.

“You can’t really force anything, you can’t try to do too much,” he said. “You’ve just got to get really good at what the team needs you to do. Once you get good at that and the team needs you to do that, you can get on the court and fill your role. I had to get stronger … mostly get more physical and become the aggressor in a lot of physical situations. That’s one thing I really learned last year.”

Jones earned valuable experience during the summer, playing games in Israel, Greece and England. Jones played for Great Brittain’s Eurobasket team in August and was eligible because his mother Ley was born in the United Kingdom.

“It was an awesome experience,” he said. “I got to go to Greece, Israel and London. It was my first time ever in Europe, over there. Just seeing everything was cool, but then basketball-wise I was playing against all pros the whole time, so it just great to play against grown men. The game is a little bit slower over there, but they’re a lot more technical. So I learned a lot of little things, as far as rotations and help-side defenses. A lot of little technical things, cuts and stuff like that that you don’t do over here that they’re really good at over there.”

Jones said the experience helped elevate his game to a higher level, which he believes will be beneficial this season.

“I use this word a lot, but I think I’m versatile in terms of, I think I can play in a lot of different matchups and a lot of different situations,” he said. “I think when I really have my game going I affect the game a lot of different ways, blocking shots, going back and forth, making multiple efforts on multiple possessions. I think that’s one thing I can help, really bring to the team that I didn’t really get a chance last year.”

Toward the end of the season, Jones said things started to “click” and the sophomore forward started to become more aware of his full potential.

“I think at practice, even though I wasn’t getting on the court, hearing (Calipari) tell me I was heading in the right direction was really good, just to keep up what I doing and build on that going into this year,” he said.

Looking back, Jones is glad he stayed the course.

“A lot of people would have gone crazy or try to give up or something like that,” he said. “But, I think last year, it was a good learning experience. It was really humbling and everything and I had to learn to just sit back and just work and not give up on a situation like that and just come back ready (to play).”

Cats ready to make a push in SEC East