Dragons, Lions to renew rivalry in Battle of 119 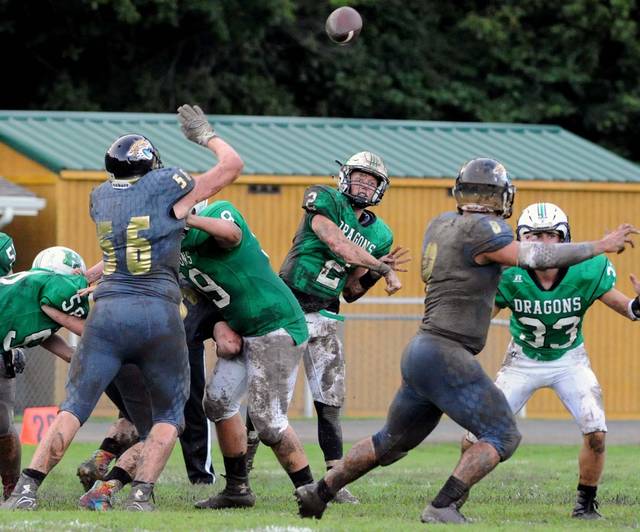 Harlan quarterback Kilian Ledford let fly with a long throw in action against Floyd Central earlier this season. The Green Dragons hope to gain their third win of the season when they travel to Pineville on Friday to battle the Mountain Lions.

Third place in District 7 will be on the line when Harlan and Pineville renew the state’s third oldest continuing series in the Battle for U.S. 119 on Friday in Pineville. The last three matchups in the series have gone down to the wire with Harlan winning 23-21 in 2014 on a last-second field goal by Boone Allison and Pineville winning 43-36 in 2015 and 22-19 in 2016 as quarterback Tucker Woolum took control of the game last fall with 185 yards rushing and two touchdowns.

“It came down to the last play the last couple of years,” Harlan coach John Luttrell said. “This has been a great rivalry and it doesn’t matter what the records are. I told our kids they would play their best game against us and will be ready to play. We have to match that and be ready to play and execute. We have to two regular season games left and we have to try to win those and give ourselves some momentum going into the playoffs, even though we’ll have to travel.”

Woolum and most of the Lions’ other key players from last year graduated and Pineville (2-7 overall, 0-2 district) will bring a five-game losing streak into the contest. The Lions have given up just under 43 points a game the last five weeks.

“We’re having a tough time and it starts with depth,” Pineville coach Bart Elam said. “We’re going into most games with 17, 18, 19 able-bodied kids and 10 of those are very young or very inexperienced. We’re having to throw them in the fire and they are having a hard time. We’re just trying to stay positive and develop those kids for the future. We’ve also had a lot of injuries. This week is as close as we’ve been to being healthy all year. We hope to have a little more depth this week.”

The Lions were given a boost by the recent return of senior running back Lawrence Simpson from an injury. Simpson has rushed for 596 yards, just behind junior Matt Golden and his 601 yards on the ground.

“(Simpson) was hurt for a couple of games, but he gave Willamsburg some trouble. He’s a hard runner who was able to get some decent runs,” Luttrell said. “That will be a key, making sure we control their running game. On defense, I expect them to stack the box like they have the past couple of years and try to stop our run. We have to do some things to counter that and get the ball in other places.”

“They are well-coached up front and Harlan teams always have been,” Elam said. “I watched them early on and then again this week and they are improved, especially up front. They’ve lost some close games. I don’t know if we’re to their level, or even close, but we’ll see what happens.”

The loser of Friday’s game will finish fourth in District 7 and travel to Hazard in the first round of the playoffs. The winner will place third and play at Pikeville in the opening round.