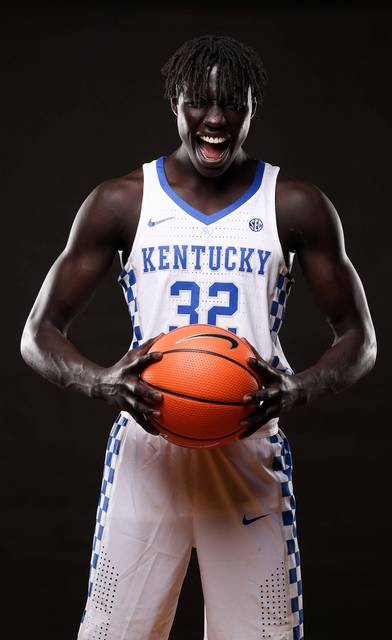 Wenyen Gabriel has wiped away thoughts of last year’s up and down season and is dwelling on the positives going into his sophomore campaign.

LEXINGTON (KT) — Once he slowed down, Wenyen Gabriel finally caught his breath.

The Kentucky sophomore forward learned to take life at a slower pace after enduing a roller-coaster ride last year, one that led to one breakdown after another.

“My body started to break down on me last year,” Gabriel said. “A lot of things were just getting to mentally as well, affecting my game. My production for the team started to go down and that was hard for me to deal with, but I think that just made me better as a player.”

Gabriel has fully recovered not only physically, but also mentally and worked on both elements of his game last summer in order to gain more confidence on and off the floor. His entire mindset has changed.

“I look back now and realize this whole thing is not a race,” Gabriel said. “It’s the beginning of my career and I just have to keep on focusing every day, one step at a time. It’s not about who is the first person to get into the lead. It’s not a race or anything like that. You’ve got to go at your own pace.

“Because I was going through some things last year, just because the media thinks certain things, doesn’t mean that it’s true. Reality started hitting me about the game and I humbled myself. Just having this mindset just means the world to me.”

Gabriel’s first season with the Wildcats didn’t go as smoothly as he planned and he said it was a “mental thing” which eventually hindered his production on the court. His scoring fell, his minutes were lowered and his overall confidence was at rock bottom.

“At the beginning (of last year), I’m thinking I’m not coming back, either,” he said. “It was more like an emotional thing. Whether it’s a year, two years or three, it doesn’t bother me now. I’m way different and I know what to expect now. When I came in as a freshman, my eyes were just opened and was just trying to listen to word of mouth and people along the way. Now I come in, I know what to expect and I build my plan and execute it.”

Looking back, Gabriel admitted it wasn’t easy enduring a down season, considering his love for the sport of basketball.

“At the time it seemed like the world was ending and that’s how passionate I am about this game,” he said. “I put a lot into it, a lot of my time, a lot of my life into the game. When I started seeing it go south, I really hurt. When you look back on it and see that it was not the end of the world and you are still good and you can still do good this year with a lot going up. I’ve got a lot of opportunity ahead of me. “

In addition to gaining more confidence on and off the floor, Gabriel also has eliminated negativity from his mindset and now focuses on the positive aspect of life both as a player and a person.

“That’s what I’ve been doing all summer, just building on positivity,” he said. “Just getting rid of negative thinking. You know everything that went positive last year, you just build on it. If it’s negative, let’s see if we can turn it into a positive.”

With a changed mindset and a renewed emphasis on the court, Gabriel realizes there’s no limit to reaching his full potential.

“It didn’t even really hit me until the season ended,” he said. “It was all over. The stress is gone and also worrying about the next game. I’m watching a bunch of my guys reach their dream and I’m happy watching their dreams come true and I just know that mine can come true, too. It was really inspiring.”