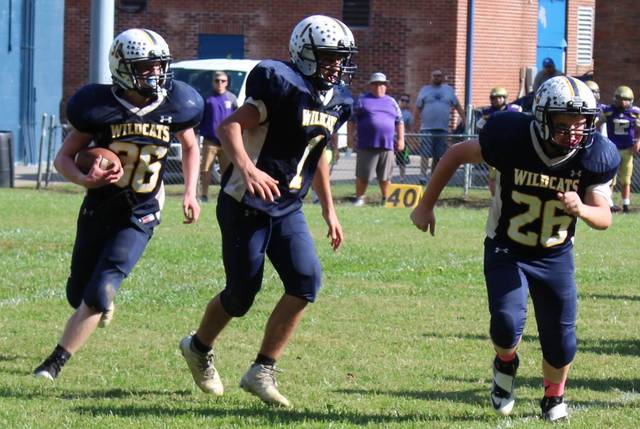 Evarts running back Jayden Ward followed Bruce Burgan (1) and Dylan Middleton (26) on an outside run during Saturday’s playoff game against visiting Meece. Evarts ended it season at 7-3 with a 51-16 loss.

Plenty of football history has been made at Coach Charlie Hunter Field over the years, but not until Saturday had it been the site of a middle school state playoff game.

Evarts was unable to build on that historical moment and the momentum of a great regular season. Visiting Meece hurt the Wildcats with their speed, scoring on numerous big plays on the way to a 51-16 win in the Division III, Region 2 semifinals.

“We didn’t have contain all game and it hurt us,” Evarts coach Ryan Sawyers said. “We didn’t come out with our heads right the first half, and it killed us. I thought we played better the second half.”

Benito Zaragoso proved to be the biggest problem as he scored four times, including several long runs when he was able to get outside.

Field position also helped Meece as Evarts chose not to punt, often giving the Briar Jumpers the ball deep in Evarts territory, including on the Wildcats’ 35 less than two minutes into the game after quarterback Bruce Burgan was dropped for a loss on fourth down.

Zaragoso had runs of eight and 14 yards before Clayton Harness went in from the 13 with 3:40 left in the first quarter. Christian Whitus missed the extra point.

Evarts answered when Burgan pulled in a high snap and found a hole in the middle of the Meece defense for a 48-yard touchdown run. Burgan’s two-point conversion run gave the Wildcats an 8-6 lead with 2:33 to play in the opening period.

Zaragoso ran 23, 10 and 14 yards to set up his 3-yard touchdown run on the first play of the second quarter. He also added the two-point conversion for a 14-8 lead.

Meece stopped the Wildcats on their 31 and needed only four plays to score again as Josh Gross went in from the 2 with 3:45 left in the second quarter. Whitus hit the extra point for a 21-8 lead.

After an exchange of turnovers, including an interception by Evarts’ Zach Potter, Meece stopped the Wildcats and added one more touchdown before the half. Zaragoso scored on a 2-yard run in the closing seconds, and Whitus’ extra point pushed the halftime lead to 28-8.

Another touchdown from Zaragoso, this one from the 20 with 6:54 to play in the third quarter, capped a three-play drive to start the second half. Gross teamed with Matt Shadoan for the two-point conversion after a penalty on Evarts.

Zaragosa needed only one play to answer as he got outside and ran 60 yards for a touchdown to make the score 42-16 with 5:44 left in the third period.

Ward took the ensuing kickoff back 55 yards, but the Evarts drive stalled inside the Meece 20.

Zaragoso broke loose on a 68-yard touchdown run with 6:53 to play. Whitus hit the extra point to start a running clock and send Meece into the Region 4 championship game against the winner of the Pineville-Williamsburg game.

Zach Potter, John Long and Damichael Brown each had runs as the Wildcats drove into Meece territory before time expired.

Evarts ended the season at 7-3 as the Southeastern Football Conference champions.

“I’m proud of them,” Sawyers said. “We ended up with the conference championship. It was a heck of a season.”

Meece will play Williamsburg, a 41-8 winner over Pineville, in the regional championship game.