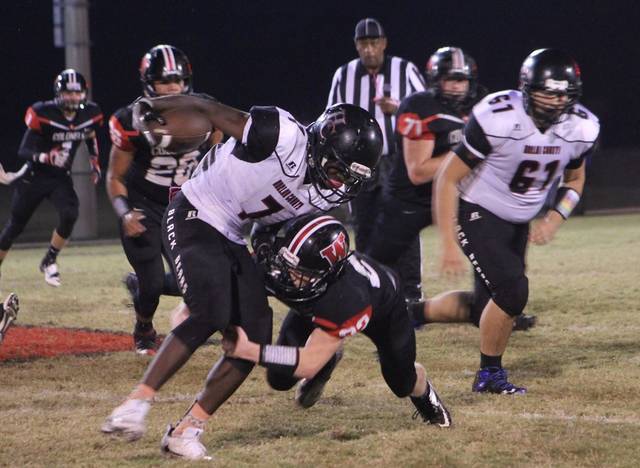 Harlan County running back/receiver Tyrese Simmons tried to break away from a Whitley County defender in Friday’s district clash in Williamsburg. Simmons scored a touchdown in the Bears’ 27-16 loss.

WILLIAMSBURG — A lot was at stake when Harlan County paid a visit to Whitley County on Friday.

A Black Bear win combined with a North Laurel victory over Perry County Central would have given Harlan County a district championship, but the Colonels had a lot to play for as well.

The Jaguars did manage to beat the Commodores but Whitley County (5-3 overall, 2-1 vs. district opponents) showed a heart of a champion by rallying for the second consecutive week to knock off Harlan County, 27-16.

The Colonel defense limited Harlan County to 211 yards of total offense and only 48 yards in the second half.

“I thought there were a lot of things that were key tonight,” Whitley County coach Jason Chappell said. “I thought our offensive line played an unbelievable game tonight. We were able to run against a very good team tonight. Defensively, after (Tyrese) Simmons’ long run, we settled down and did things right. I thought our defensive staff did a phenomenal job tonight.”

The 11-point victory keeps the Colonels’ District 7 repeat bid alive along with securing a home playoff berth, but they’ll need to take care of business against Letcher County Central for both to happen. A win over the Cougars and a Harlan County win over Perry Central would force a three-way tie for first place in the district and then the tie-breaker system would take affect.

“Harlan County played really good football, and they made us earn it,” Chappell said. “I told our team we control our own destiny because Harlan County beat North Laurel, and we still need to win. We’ve got to go to Letcher Central and win and then we will probably need to beat Hazard to win the district championship. I thought we played very good tonight. I’m very proud of our kids.”

Whitley County was staring at a 16-7 deficit going into the third quarter, but Dylan Wilson’s 18-yard touchdown pass to Dawson Swain combined with Logan Lambdin recovering a fumble and racing 45 yards for a touchdown gave the colonels a slim 20-16 lead going into the fourth quarter.

The Colonels were able to put the game away as Swain reached the end zone on a 2-yard run with 4:59 left in the game, increasing Whitley County’s lead to 27-16.

Harlan County controlled the first quarter as Marcus Kelly connected with a 29-yard field goal to give his team a 3-0 lead with seven minutes remaining. Simmons broke loose and scored on an 86-yard run to increase the Black Bears’ advantage to 9-0 with 1:10 remaining in the opening quarter.

Wilson’s 1-yard quarterback keeper allowed Whitley County to cut its deficit to 9-7 with 2:53 left in the first half, but Harlan County’s Quintin Mickens scored from 5 yards out right before the half to give his team a 16-7 edge. A long pass play from Colby Cochran to Simmons set up the score.

Whitley County took control of the game in the second half, as Wilson’s 18-yard touchdown pass cut their team’s deficit to 16-14 with 4:27 left in the third quarter. The Black Bears were trying to answer on their ensuing possession, but a fumble at the Harlan County 45-yard line was picked up by the Colonels’ Lambdin, who returned it for a touchdown, giving his team a 20-16 lead with 3:22 left in the third quarter.

Whitley County managed to put the finishing touches on the win with 4:59 left in the fourth quarter thanks to a two-yard touchdown run by Swain. Swain finished the game with 102 rushing yards while Wilson was 13-of-19 for 139 passing yards.