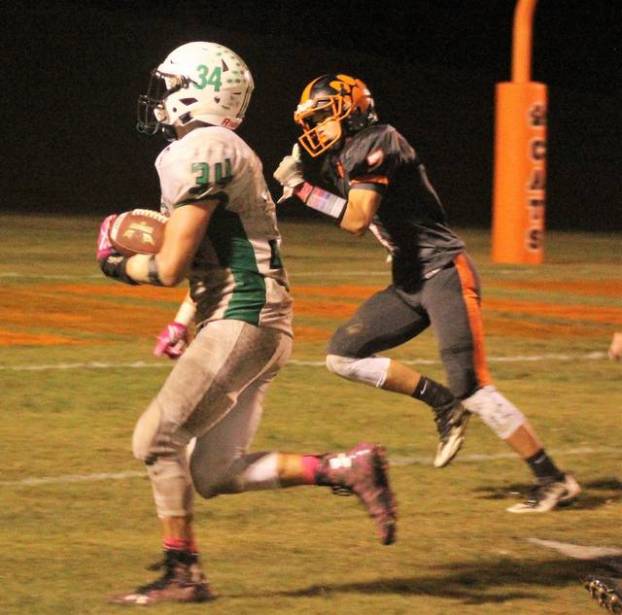 Harlan freshman running back Ethan Clem broke free for a touchdown in the Dragons’ 26-14 loss Friday at Lynn Camp. Clem led the Dragons with 69 yards on seven carries.

CORBIN — For a Lynn Camp program that had fallen on hard times in recent years, Allen Harris’ first objective as coach was to convince his Wildcats they could compete.

A 53-0 win last week over Lynn Camp was an important step. A 26-14 victory Friday over the visiting Harlan Green Dragons drove the point home even more as Lynn Camp improved to 6-2 overall and 2-0 in district action with a showdown set up for next Friday at Williamsburg to determine the District 7 champion.

“We’re playing for each other and playing unselfish football as a team,” Harris said. “We worked in the spring on getting bigger and stronger and that showed tonight in the fourth quarter. If you can get them to believe and work together you can have something special, and they are a special bunch of kids.”

Lynn Camp featured a strong ground game that rolled up 307 yards on the ground, led by junior tailback Dalton Cook with 126 yards on 20 carries and senior halfback Dalton Medlin with 100 yards on 15 carries. Junior Eric Mitchell, a first-year starter at quarterback, may have been the most valuable player on the night as he ran for 78 yards on eight carries, including two touchdowns on the ground and one through the air.

“We spread them out some and started running Eric a little,” Harris said. “He’s a great open-field runner. I’m proud of the progress he’s made.”

“Harlan came in with a great gameplan. I had said it would be like a heavyweight title fight and it was,” Harris said. “We had several people step up. We had to make some adjustments.”

Harlan put together one of its best drives of the season to answer, marching 60 yards in 10 plays. John Brady Brock, Kendal Brock and Ethan Clem each picked up first downs with Clem’s 22-yard run to the Lynn Camp setting up a Ledford touchdown on the next play. Ledford’s extra point put the Dragons up 7-6 with 7:05 left in the first half.

“We put together a good drive,” Luttrell said. “We came off the ball and we executed. We wanted to spread them out a little early to see how it went, but we were eventually going to go back to that. I was proud of that. I thought it showed their physicality.”

Lynn Camp responded with a 13-play, 55-yard drive that featured runs of 15 and 19 yards by Mitchell, both on third-and-long plays. The Dragons missed several tackles on both runs.

“Missed tackles hurt us. We told them at halftime if we had made the tackles, we’d have been in good shape,” Luttrell said. “I thought our kids got a little tired in the second half. The effort us there. I wish I could will it to make them win because they deserve it. They come out every week and put the work in and keep a good attitude.”

The Wildcats moved 80 yards in only six plays in the third quarter as Medlin went the final 45 yards around the left side for a touchdown. Mitchell raced around the right side for two points and a 20-7 lead with 6:47 left in the period.

Harlan came back with an 11-play, 65-yard drive that featured a 16-yard pass to Clem on a fake punt by Ledford. An 11-yard run by Ledford set up the Dragons for a 20-yard touchdown run by Clem with 1:23 left in the third quarter. Ledford’s extra point cut the deficit to 20-14.

The Dragons got the ball back with a chance to take the lead but the Lynn Camp defense answered with a stop on fourth down. The Wildcats put the game away when Mitchell, who left the game earlier in the period when he was hit hard on the knee, took off around the left side, picked up a block and went 35 yards for a touchdown on a third-and-14 play with 4:34 remaining. Mitchell’s pass on the two-point conversion attempt fell incomplete.

A Chase Brown interception on a deep pass intended for Will Varner ended the last Harlan threat with 3:34 to play and allowed Lynn Camp to run out the clock when Medlin went 11 yards for a first down and Mitchell teamed with Dominic Cook for 12 yards and a final first down on the Harlan 28.

Harlan (2-6 overall, 0-2 district) closes its district schedule Friday at Pineville in a game that will determine third place in District 7 of Class A.

As you know, when October rolls around, it’s basketball time in Kentucky. That means the college basketball yearbooks are out,... read more