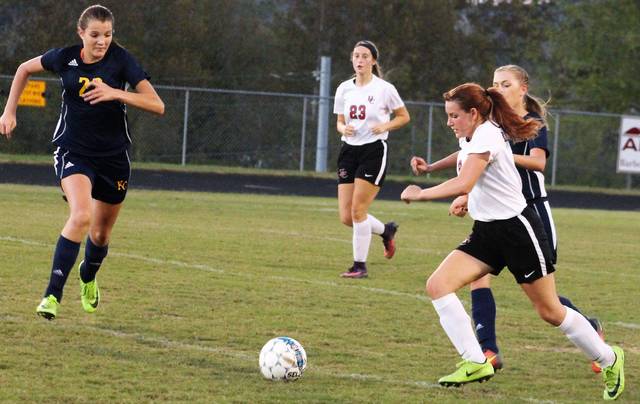 Emily Fultz raced down the field against Knox Central in the 50th District finals on Thursday in Barbourville. Lady Panthers won 2-0 on penalty kicks.

BARBOURVILLE — Peyton Payne netted a hat trick and four other players scored goals as the Knox Central Panthers defended their District 50 soccer championship with an 8-1 win over visiting Harlan County on Thursday.

Payne, who was named the game’s most valuable player, scored less than nine minutes into the match and helped Knox Central build a 4-0 halftime lead that was 8-0 before the midway point of the second half in a performance that coach Michael Poff described as one of the most impressive his team has had this season.

“This was one of the best games we’ve played all year. And you couldn’t ask for a better time to have a game like this with it being the district championship,” Poff said. “I’m extremely proud. We have seen all of our hard work pay off. Of course, we’ve got bigger goals than this. But we’re going to enjoy the night and celebrate, take tomorrow off, and then get back to work.”

Harlan County coach Andrew Williams agreed that it was a very impressive display of soccer by Knox Central, although he is certain his team played better than the final score indicates.

“I’m really proud of our guys for the way they played and handled themselves tonight,” Williams said. “We came out and really competed well early and we never gave up. We hustled the entire game. But in the end I believe experience won out. Knox Central is a very experienced team with a lot of speed and athleticism.”

Knox Central jumped on top early when Payne got behind the defense and scored at the 31:22 mark of the first half. About nine minutes later, Markelle Turner and Payne scored goals just one minute apart to make it 3-0 in the game’s first 20 minutes of play.

Turner scored another goal at the 7:26 mark of the first half to give Knox Central a 4-0 advantage that stood until Payne scored his third goal with 33:26 remaining in the game to extend the lead to 5-0.

Ethan Strong, Jason McNeil and Austin Smith all scored goals in a six-minute span as Knox Central stretched the advantage to 8-0.

Harlan County got on the board with 6:28 remaining on a goal by Marcus Kelly.

While he acknowledged that Knox Central was the better team, Williams was also quick to point out that his team showed many traits that give him great hope for the future of the program.

“I could not be more happy with how my guys competed and fought all the way to the end,” he said. “For this first-year team to be able to play in the district championship game and go on to the regional tournament is a huge accomplishment.

“Our team is loaded with freshmen and sophomores. We only lose two seniors. Most of these guys just started playing soccer this year. As they become more experienced, we will have a better understanding of the game, and I believe the sky is the limit for these guys.”

Both teams now advance to the 13th Region Tournament at Corbin.

In girls action, Knox Central was also able to take home the championship trophy with a 2-0 win over Harlan County in a game that was decided by penalty kicks after a scoreless tie through regulation and two overtime periods.

Neither team was able to score in its first three penalty kicks, but that changed when Knox Central freshman Emma Callihan got one past the goalkeeper in the fourth round, followed by a goal from fellow freshman Lucy Jackson to seal the win in the fifth round of penalty kicks.

Knox Central senior Ashley Vososo, who stopped all of Harlan County’s penalty kicks, was rewarded with the game’s Most Valuable Player Award.

The win was the first district championship for Knox Central since the program’s inception in 2014. The Lady Panthers broke nearly every school record this season, including most wins (5), most district wins (4), most goals scored (16), least goals allowed (57) and most shutouts (4), among others.