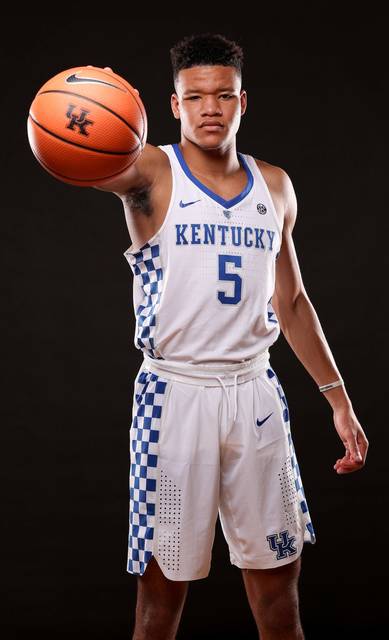 Freshman forward Kevin Knox was recruited as both a football and basketball standout in Florida before choosing basketball and the University of Kentucky.

Knox, son of former Florida State wide receiver Kevin Knox who won a national championship with the Seminoles in 1993 and played one season for the Arizona Cardinals, wanted his son to compete against the best while growing up.

“He always made me play on a higher level,” Knox said of his father. “When I was a little and I play up two grade levels, he would put me under pressure and outside my comfort zone. He just made sure I had the right mentality growing up. Dad always had that work ethic and one of the hardest working guys in the world I think. He definitely taught me a lot.”

Knox, Florida’s Mr. Basketball last season, concentrated on a football career as a quarterback at Tampa Catholic before deciding to pursue a career in basketball. Prior to becoming one of the most sought-after recruits on the hardwood, college coaches were well-aware of his football talents.

“I had a lot of collages interested and last year (my dad) wanted me to play football, but I felt basketball is what I wanted to play,” adding that giving up football was “tough.” “When I was little, I thought that’s what I was going to play when I got older and stuff. For my dad, it was tough at first on him, but he got over it, but he was real happy when I made the decision and we just focused on that.”

The son of an athletic mother and father, Knox comes from a long line of athletic family members and inherited their skills.

“Pretty much, growing up, pretty everyone (in my family), all my aunts, uncles played sports and my dad won a national championship and got drafted in the NFL,” he said. “He knows what it takes to get to the next level — the mentality, the work ethic — he’s always helped me with the stuff and it’s helping me transition here.”

Knox added that he was always “pushed hard” during his childhood and said the extra nudge helped prepare him for college.

“Growing up I was always pushed hard,” he said. “My dad is a crazy guy and (coach John Calipari) is the same way. They like to push you and it’s definitely what I expected. They both yell, jump up and down and screaming at all the players and growing up, I was definitely used to it with my dad before I got here and I’m kind of used to it. It make it easy for me.”

During the recruiting process, Knox took his time deciding his college choice and eventually settled on Kentucky. Knox said Calipari’s honesty made his decision easier. True to his upbringing, Knox added that Calipari’s style also was influence.

“I just want to trust the coach and I feel like Cal is not going to sugar coat nothing,” Knox said. “He’s going to tell me when I’m not playing well and I need to pick it up and he’s going to tell me when I’m playing good. That’s the coach you want to have, somebody who’s not going to sugar coat you and tell you when you need to step it up. He’s going to push you to the max, get you outside of you comfort zone and get you ready for the next level. That’s what I love about being here.”

Although it would be easy for a player of Knox’s stature to look ahead, he plans to stay in the moment and embrace the college experience.

“I think as a freshman you have to come in with a mindset like you just got to work hard,” he said. “You just can’t think you’re going to be out in 10 months because you never know what’s going to happen.