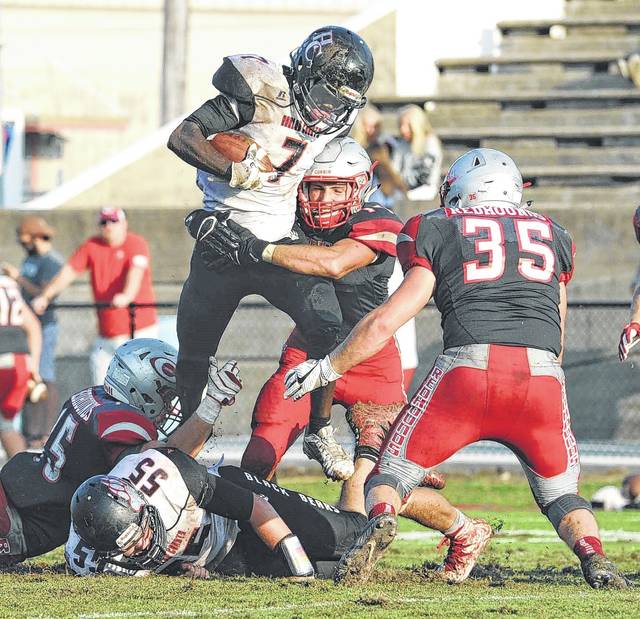 Harlan County senior receiver/running back Tyrese Simmons followed a block from freshman guard Kobe Burkhart in action earlier this season at Corbin. The Black Bears will try to improve their district record to 3-0 on Friday at Whitley County.

Midway through their four-game district schedule, the Harlan County Black Bears find themselves in the exact position that coach Eddie Creech hoped for when the season began. The Black Bears are 2-0 in district competition and could lock up a district title with a win Friday at Whitley County, along with a North Laurel victory over Perry Central.

While the Bears’ task Friday is clear, no one expects it to be easy. Whitley County (4-3 overall, 1-1 district) knocked off the Bears last season on their way to a district championship, overcoming a 27-0 deficit to win at Coal Miners Memorial Stadium.

“That’s one of those games that no matter how far you try to put it back in your memory you can’t erase it,” Creech said. “We were a score or two away from a running clock and couldn’t finish it out, but it’s a new year and, hopefully, we can come out and play some solid football.”

Whitley County was predicted to repeat coming into the season with several key players back, led by senior quarterback Dylan Wilson, who has passed for 988 yards this year. Running back Dawson Swain has handled most of the Colonels’ ground duties with 769 yards through the first six games. Cameron Rose is first in catches with 27 for 468 yards and seven touchdowns. Swain has 18 catches for 132 yards.

“They are explosive offensively,” Creech said. “They are type of team that if you have a slip up on defense, instead of it being a 15-yard gain it’s 70 or 80 yards to the house. They have a couple of guys who ran track who are really speedy. Coach (Jason) Chappell does a great job with them offensively, and coach (Randy) Frazier does a great job with their defense. They held Corbin to 14 points and held Bell to six. They are a well-rounded football team. “

After losing 29-14 to North Laurel to open their district schedule, the Colonels bounced back last week last Friday with a 27-20 win over Perry Central to stay in the hunt. The previously unbeaten Commodores led 20-14 in the fourth quarter before Whitley rallied with two touchdowns, including an interception return for a score late in the game. The game against HCHS is especially important for the Colonels also, since they could still force a three-way tie for first place by knocking off Harlan County.

“I feel good about our team,” Chappell said. “We’ve had a couple of games where we haven’t played up to our standards, but we have played an extremely competitive schedule that has forced us to get better. The hope is that your schedule pays off for you this time of year. “

Harlan County (3-4 overall, 2-0 district) opened the season with a win over 4A power Ashland, but then lost four straight when their injury list grew to as many as a half dozen starters being knocked out of action. The Bears bounced back with a 23-13 win at North Laurel before pounding Letcher Central 54-6 two weeks ago before having an open date last week. The Bears know they are very unlikely to win in a tie-breaker situation since Ashland Blazer is their only non-district win at this point.

“We all know how important the game is,” Chappell said. “Harlan County would all but secure a district championship with a win. For us, it would keep our hope of a second consecutive district crown alive by, hopefully, creating a three-way tie situation. It’s a really big game because beyond the final district standings, it also seeds you in the regional playoff.”

Seniors Quintin Mickens and Tyrese Simmons are the top playmakers for the Bears with 423 and 338 yards rushing, respectively. Junior quarterback Colby Cochran took over for an injured Jacob Branson and has played well, completing 40 of 80 passes for 485 yards. Senior Devon Rodrigues leads the team in receptions with 27 for 273 yards. Simmons has 12 catches for 71 yards.

Harlan County is extremely talented, probably one of the two most talented groups we have seen all year,” Chappell said. “They are big, physical and fast. We have great respect for their kids and coaches in general. I believe they are an outstanding team.”

“We have to have the same offense that showed up the first two district games,” Creech said. “Quarterback play is important for us — if we can get Colby Cochran to continue playing the way he has. We also have to take care of the football.”

Junior linebacker Garry Henson leads the team in tackles with 73, followed by Caleb Carmical with 66 and Christian Hall and Simmons with 34 each.

“They are a tremendously talented group, but the keys for us to win certainly would include finding a way to limit their big plays on offense and in the kicking game as they have several players who can score from any spot on the field and then finding a way to deal with their defensive pressure as they are very big, fast and aggressive on that side of the ball,” Chappell said.