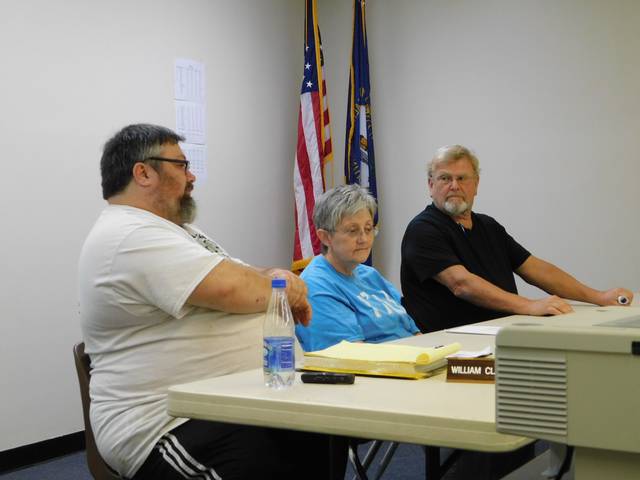 Loyall City Council members Clark Bailey, Treena Cornett and David Lewis discussed the possibility of finding someone to reopen the city’s swimming pool or the possibility of selling the pool in order to cut down on its cost on the city with the electrical bills. The council agreed that the pool could be a valuable asset to the Harlan County youth and the county’s senior citizens.

The Loyall City Council discussed, during Monday’s regular scheduled meeting, the possibility of selling the city swimming pool if they could not find funding to pay for its reopening.

The topic was brought up by council member Clark Bailey, citing that his first preference was to have the pool in operation for the county’s kids. However, he said that he would rather see it sold if reopening it was not an option.

“If we can declare it surplus property and sell it, I think we should,” said Bailey. “It would do us better having the revenue from it than it setting up there empty.”

City treasurer Mandy Longworth said the pool was purchased for the city by a land and water grant and there were no restrictions on the deed saying that it could not be sold. However, whoever purchases the pool will be obligated to use the pool and the recreation building for recreational purposes only.

Mayor Clarence Longworth said that in a study and survey of Harlan County youth, the first thing the children had placed on their list of desires for the area was to have a swimming pool.

Council member David Lewis said if the pool was in service every student in the county would benefit from it.

“They’d have swim teams in every school. It wouldn’t be just basketball and football, said Lewis.

Council member Treena Cornett also stated that many children from the Harlan area are having to go out of town to enjoy the sport of swimming.

“That’s a shame because we have children all around us…..you know……that are going to Barbourville to swim,” said Cornett. “And when they compete in swimming, they compete nationally no matter where they are from. They hold their record and their standing and our children would be in competition not with just local counties, they would be in competition with the nation.”

“The alumni association or anybody that’s from here who’s made a lot of money like the country music guy……what’s his name……Jerry Chestnut. Reckon he’d be interested in throwing some money into it?” said Bailey.

Jerry Chestnut, a Nashville country music singer and songwriter, is a native of Loyall and has a highway inside the city named for him.

Bailey said the council’s question is what’s the county going to do about it, citing that it would be an asset to the county residents and students if the pool were to reopen.

Longworth said the first cost estimate of opening the pool was approximately $350,000 and six or seven years later the cost had gone up another $100,000 bringing the total cost up to around $425,000 to $450,000, citing that the last estimate was at least four years ago. Longworth noted that the cost of reopening it has more than likely gone up during the past four years.

Longworth said his preference was to see the pool reopened for all of Harlan County to enjoy, citing that if anyone did want to help with the funding he wanted to make sure that the pool was accessible to everyone and not just a select few, citing that the price should be set so that all students of the Harlan County area can afford to enjoy the use of the pool.

“If anyone is interested in opening it up, come to the council meeting and talk with us,” said Longworth.

Bailey said in an interview after the meeting that he prefers the pool to be back open and in operation. However, he noted that if that is not a possibility then the council must act accordingly due to the fact that the pool is costing the city money with electrical bills by just setting there unused.

Other council business included the first reading of an ordinance of time change for the council meetings, which states that the meeting time will change from 7 p.m. to 6 p.m. The date will remain the same, the second Monday of the month. The second reading of the ordinance will be heard next week during a special called meeting.