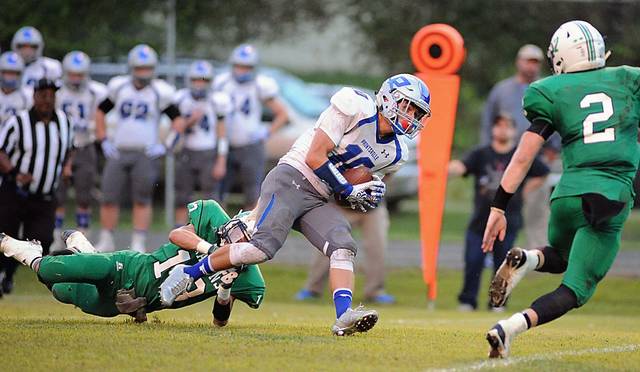 Harlan defensive back Jarrett McKenzie caught Paintsville receiver James Allen as safety Kilian Ledford moved in during action earlier this season. McKenzie is tied for the team lead with three interceptions and Ledford is first in tackles with 54 for the Dragons, who travel to Lynn Camp on Friday.

After seeing a 14-game district losing streak come to an end last week in a dominating 53-0 win at Pineville, the Lynn Camp Wildcats have another big goal in mind this week as they prepare for a visit from the Harlan Green Dragons.

Lynn Camp (5-2 overall, 1-0 district) can lock up at least second place in District 7 and a home playoff game with a win and set up a showdown the following week against Williamsburg. Harlan (2-5 overall, 0-1 district) is also in position for a home playoff game with a win on Friday, even though a district title is all but out of reach after a 30-6 loss last week at home against Williamsburg.

“It’s for a home playoff game for sure,” Harlan coach John Luttrell said.

“We’re not trying to look past Harlan. We know they are a great football team,” Lynn Camp coach Allen Harris said. “I think it will like a heavyweight fight. We are similar in offense and similar in defense.

“Our goal every year is to win the district. We felt this year we had as good a chance as anybody to be a contender. We have to make it through this Friday and see what happens.”

The Wildcats bring a four-game winning streak into the contest, along with renewed confidence.

“We just finally got everybody healthy and in football shape. Everything has come together at the right time for us,” Harris said. “I feel like we’ve finally made it to the next level. There is still a long way to go. I’m satisfied where we are right now, but we still have a long way to go.”

Both teams count on a strong running game to supply most of their offense, a tradition going back many years for both programs.

Lynn Camp features one of the region’s top running backs in junior Dalton Cook, who rushed for 1,469 yards last season and has 699 so far this year despite being slowed by a groin injury

“He missed the whole summer, so he wasn’t really in game shape until a couple of weeks ago,” Harris said.

Cook rushed for 178 yards in the win over Pineville, while senior Brenton Medlin added 111 yards. Both Cook and Medlin scored two touchdowns as the Wildcats won their fourth straight game. Medlin has 585 yards rushing on the season. Lynn Camp has scored at least 38 points in all five wins.

“They are typical Lynn Camp,” Luttrell said. “They have two of the better backs in this area with Cook and Medlin, and they have two big, strong fullbacks they alternate in there. They try to get those guys the ball. They run hard and do a good job of blocking for each other. We have to be able to stop the run. We have to run to the football and tackle. Offensively, we can’t turn the ball over.”

Harlan also features a strong ground game led by senior Kendal Brock and junior John Brady Brock. Junior quarterback Kilian Ledford showed he was also a running threat in the Williamsburg game with a team-high 87 yards on nine carries, including a touchdown. Ledford also leads the team in tackles with 54 from his safety spot. Junior linebacker Tate Bryson is next with 39 tackles. Jarrett McKenzie and Jon Eldridge each had interceptions last week and are tied for the team lead with three each.

“We have to continue to play good defense and execute assignments,” Harris said. “We’ve not played a team like Harlan. They are like us in that they run a lot of power sets, counters and traps. We have to stay disciplined. Harlan is a good team. Their record doesn’t show what kind of team they are.”