Greent plans to create his own UK legacy 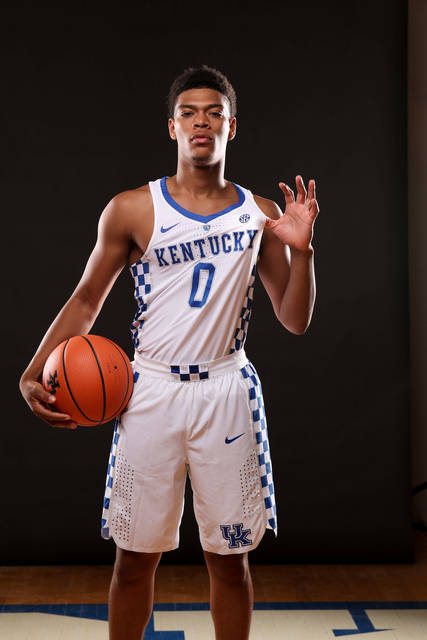 LEXINGTON, Ky. (KT) — Quade Green hasn’t had much down time this fall.

“It’s been crazy,” Green said. “Adjusting to college is the busiest thing ever in my life right now. I’m going through the process right now.”

Now that Green has adjusted to college courses, his next step is juggling textbooks and basketball as the Wildcats gear up for preseason practice. Green said the past two months he’s been getting used to his new teammates and bonded quickly.

“The first day I was all good,” Green said. “It helped me grow and getting to know the guys helped even more. We came in and bonded all summer.”

Following a long line of outstanding point guards that began with John Wall, followed by Brandon Knight and most recently De’Aaron Fox, Green admitted it won’t be an easy task, but is focused on making his own mark on the program.

“It’s hard to fill everybody’s shoes that has come through here, but I’ve got my own shoes to fill,” he said. “I’ve just got to follow the rules like Cal wants me to, do what he says and do that’s what I’ve got to do to be a pro.”

Although one of the most prolific points guards in the current class, Green also is known as a scorer off the dribble and tallied 40 points in a high school game last season. The freshman point guard remembers the feat and “just played the game the same.”

“It wasn’t hard, but it wasn’t easy,” he said. “It was kind of a normal game, really. I was really good that day, making all my shots and then just having a good day. I probably missed like two shots.”

Green is a big fan of former Kentucky standout guard Rajon Rondo and remembers when the former Wildcats star point guard was one of the top players in the collegiate ranks. Green “watched everybody” but mostly Rondo.

“I remember Rondo and how he played to this day,” Green said. “He was a special point guard and he was exciting to watch. He makes things easier and better for everybody. That’s what I want to try to do, make things easier for myself and for other people.”

Green got to play pickup with his childhood hero when Rondo was in town for a charity basketball game recently and wasn’t surprised by Rondo’s visit to campus.

“That’s what you expect at Kentucky, everybody is a pro around here,” Green said. “Everybody wants to be a pro, so coming here brings me closer to my destination. I’m close and I’ve got a lot more to do, but I’m going to keep working.”

Although coming in as one of the top players in the Class of 2017, Green knows things are different in college, especially at Kentucky.

Unlike previous point guards who have had an experienced backup, Green will be counted on to carry the load in the backcourt and the freshman guard feels no pressure. Prior to his arrival, Green was nervous, but has settled in since then.

“All the butterflies went away,” Green said. “That’s all gone now. I’m having fun, everybody is having fun. I’m loving it here.”

Green also is looking forward to the season, which unofficially begins with Big Blue Madness on Oct. 13 at Rupp Arena.

“I embrace the grind all of the time,” Green said. “I’m looking forward to it. “

Jackets pull away for win over Harlan