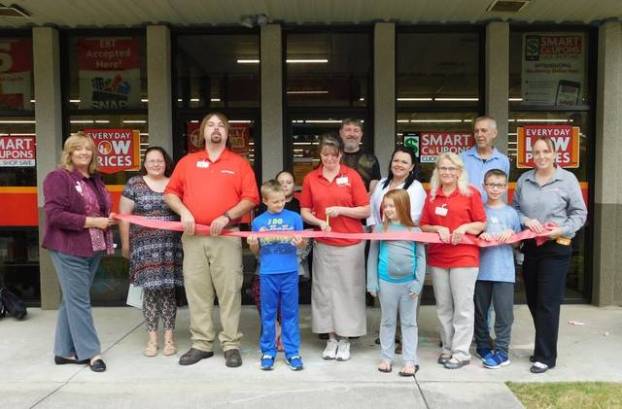 Family Dollar Store Manager Fran Ramsey (middle), surrounded by the store’s regional officials, several store employees and their families and members of the Harlan Boys and Girls Club, prepared to cut the ribbon for the store’s grand opening on Saturday.

The Family Dollar Store, located in the old Harlan Daily Enterprise building next to Hardee’s, kicked off its grand opening on Saturday with a ribbon cutting and donation ceremony one week after the store’s official opening to the public.

The store, formerly located at Woodland Plaza, closed late last year in preparations for renovations to the new location. This Saturday’s ribbon cutting was originally scheduled to take place on Sept. 30. However, do to the building not being inspected on time the ceremony was moved to Saturday. While the building was inspected by fire officials on Sept. 30 and did open later that day, it was not open in time for the originally scheduled 10 a.m. ribbon cutting.

According to a previous report, The Enterprise vacated the building in March, and an extensive remodeling of the structure was done with workers setting up shelving and stocking the store. Family Dollar Project Manager for Development Renea Holmes and her team prepared the store for the grand opening. Holmes said the store will likely maintain a staff of approximately seven people. However, many more including electricians, plumbers and other workers were involved in getting the store ready for business.

A Baxter man is facing charges including marijuana trafficking and possession of a firearm by a convicted felon after police... read more