Jackets pull away for win over Harlan 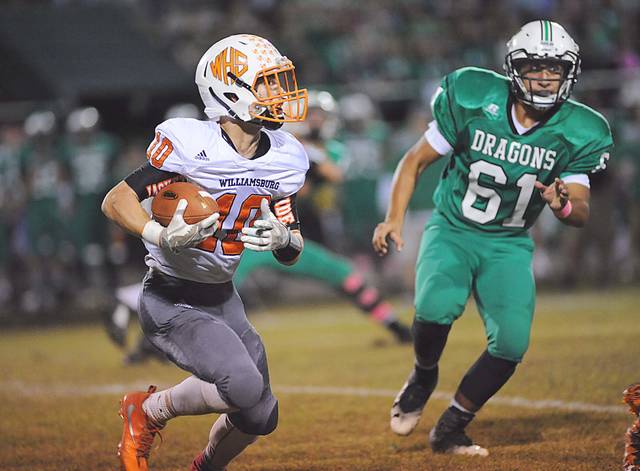 Williamsburg sophomore running back Dalton Ponder ran for 213 yards on Friday to lead the visiting Yellow Jackets to a 30-6 win at Harlan.

Jerry Herron has won a lot of big games in his 12 seasons as the Williamsburg football coach, including two regional titles and two trips to the state finals, but there was one place he hadn’t won, at least until Friday when the Yellow Jackets pulled away in the second half for a 30-6 victory at Harlan.

“These kids have done a lot of things, but this is my first win at Harlan,” Herron said. “I told these kids we needed to do something to change our history, and they did it tonight. They fought hard and played good run defense. I was pleased with our effort tonight.”

Williamsburg (4-3) counted on sophomore running back Dalton Ponder and senior quarterback Alec Poore for most of its offense as Ponder ran for 213 yards on 22 carries and Poore threw for 240 yards and three touchdowns.

“(Ponder) is a playmaker,” Herron said. “We’re tried not to run his legs off against some of the big teams we’ve played against. We had been holding him back a little and tonight he showed what he was capable of doing.”

The Williamsburg offensive front also played a big role in the victory as Ponder was often 10 yards or more down the field before he was touched. He had 10 runs that covered at least 10 yards and was never tackled for a loss.

“We didn’t win the line of scrimmage. You won’t many games when that happens,” Harlan coach John Luttrell said. “(Ponder) is a good athlete, but we just didn’t tackle well. This game comes down to blocking and tackling. If you can’t block and tackle you can’t win. We had two weeks to get ready and you couldn’t tell it out there. We just didn’t execute.”

Harlan had its chances for much of the first half as the Jackets continued to thwart their own drives with costly penalties with five for 60 yards in the first half, most coming at the worst possible times. The Jackets didn’t reach the end zone for the first time until the final minute of the half when Poore directed a six-play, 80 yard drive that featured a 42-yard pass to Devonte Powell and 8-yard touchdown strike to Darrell White with 13 seconds left in the first half. Ponder’s two-point conversion gave the Jackets an 8-0 lead and plenty of momentum.

“That was huge,” Herron said. “We needed that going into the half. That was a big momentum swing.”

Williamsburg wasted no time taking control in the second half with a 10-play, 70-yard drive capped by a 3-yard pass to Eli Mattingly. Ponder’s run pushed the Jackets’ lead to 16-0 with 8:11 to play in the third quarter. Mattingly, Ponder and Caleb Rose each picked up first downs in the drive.

The Jackets needed only four plays to score again in a series that extended into the fourth quarter. Poore faked a handoff to Ponder and went 20 yards around right end for a score. Poore threw to Mattingly for the two-point conversion and a 24-0 lead with 11:11 left.

Jeremy Purdie recovered an onside kick to set up the final Williamsburg scoring drive. Ponder did most of the damage, picking up 42 yards on runs and catches before Poore found Rose for a 3-yard touchdown pass on fourth down with 8:29 to play. The two-point conversion pass was incomplete.

Harlan quarterback Kilian Ledford had runs of 38 and 10 yards as Harlan put together a scoring drive late in the game, capped by Ledford’s 2-yard run with 1:19 to play. A fumbled snap foiled the conversion.

Harlan (2-5) will travel to Lynn Camp on Friday in a game that will likely decide second place in District 7 of Class A. Williamsburg will at home against Pineville.