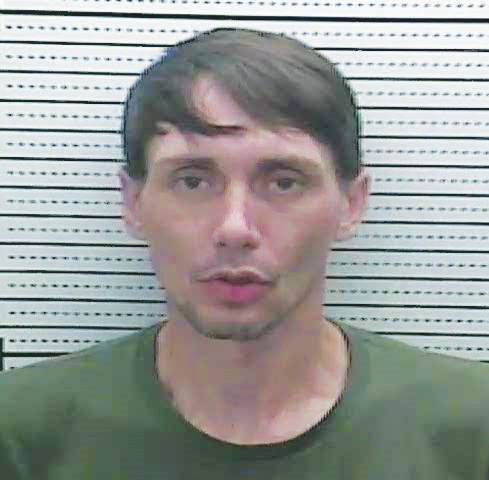 Kentucky State Police Trooper Brandon Burton arrested a Pathfork man on multiple charges on Oct. 3 after a complaint was received at Post 10. The incident later resulted with a charge of promoting contraband at the jail.

According to Burton, while en route to Blue Diamond Camp in Pathfork, dispatch advised that the accused, Brandon Helton, 40, had two active warrants for his arrest.

“Upon arrival, (Helton) ran towards the backyard and hid behind a garage,” Burton stated. “(Helton) was non-compliant with the Troopers orders and began making unreasonable noise while being escorted to my cruiser.”

Helton was charged with second-degree disorderly conduct, resisting arrest and served the warrants.

According to a second citation, once Helton was lodged on the two active warrants and criminal charges at the Harlan County Detention Center, the jail staff notified KSP they had found contraband on Helton during a search of his body.

“(Helton) was found in possession of a clear plastic baggie containing a leafy green substance inside his person believed to be marijuana,” Burton said. “(Helton) denied possession of any drugs/other contraband when asked several times before entering the jail prior to the discovery of the contraband.”

Helton was additionally charged with first-degree promoting contraband, possession of marijuana and possession of drug paraphernalia.

In other police news:

* Billy Brock, 29, of Loyall, was arrested by Harlan City Police Sgt. Jeff Owens on a warrant after he allegedly fled police Oct. 3.

According to the citation, Brock was stopped by HPD Officer Terry Jacobs for having an active warrant. Brock then proceeded to take flight to evade arrest. The officers gave chase telling Brock to stop. Officers lost sight of Brock in a tall thicket of weeds. Brock was located and advised to come out of the weeds. Brock took a step like he was going to run again when an officer tazed him.

The warrant was served on Brock for a charge of first-degree wanton endangerment. Brock was accused of throwing a rock at a car with a female and two children inside. The rock busted the window doing estimated damages of $250;

* Paul Rigney, 41, of Evarts, was arrested by KSP Trooper Kenny Sergent on Oct. 2 on a charge of second-degree assault. Rigney was accused of cutting his wife’s neck.

According to the police citation, Jeanne Rigney was at UK hospital and gave a statement there stating that her husband had cut her neck. She was at the hospital due to the injury to her neck. A warrant was obtained and served.

* Dylan Turner, 19, of Wallins Creek, was arrested by the Harlan County Sheriff’s Office on Oct. 3 after being served an indictment warrant. He was charged with first-degree possession of a controlled substance, possession of marijuana and possession of drug paraphernalia;

* Tony Smith, 48, of Putney, was arrested by the Harlan County Sheriff’s Office on Oct. 3 after being served an indictment warrant. He was charged with second-degree burglary and theft by unlawful taking under $10,000.

Haunt Fest will last way into the night