Haunt Fest will last way into the night 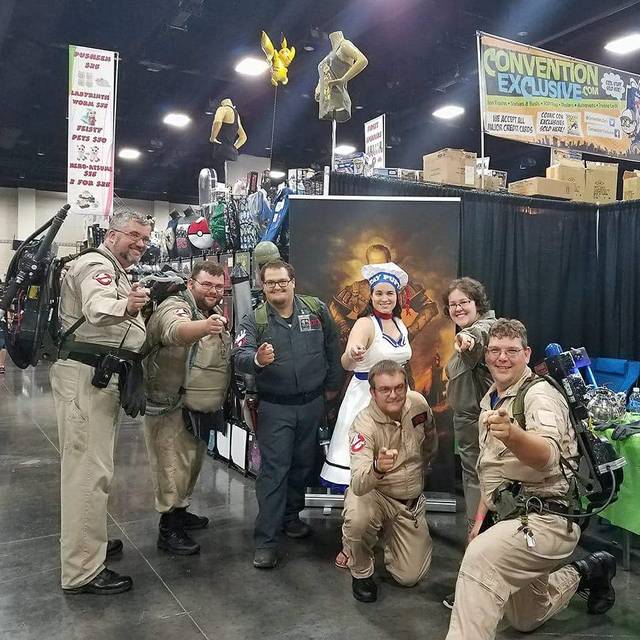 The Smoky Mountain Ghost Busters are a Harlan Haunt Fest favorite. This crew of Tennessee ghostbusters will be at this year’s Haunt Fest with their popular vehicle, the Ecto 1.

(This is the fifth story in a series about one of Harlan County’s newest and fastest growing festivals.)

The fourth annual Harlan Haunt Fest officially kicks off today, with activities lasting well into the evening. While internationally-known and locally aspiring actors, along with artists, authors, crafters, and cos play participants, will fill the showcase floor of The Harlan Center for the pop culture and horror convention until 6 p.m., there is still plenty more to enjoy after hours. The showcase floor will transform into a karaoke stage and masquerade dance at 7 p.m., where party goers can enjoy a night of music, food, and fun. Catered by The Portal restaurant, dinner orders begin at 8 p.m., and Harlan’s own musicians Brooklyn Collins and Mandela will rock the night starting at 9 p.m.

“And we plan to bring it — total high energy,” said Mandela’s drummer, Parker Eads. “Haunt Fest is going to be a good venue for us, because we love to amp it up, and Haunt Fest will be such a cool place just to rock it.”

Collins is also looking forward to performing at Haunt Fest.

“My family all loves Haunt Fest,” Collins said “It’s just a place to show your creativity, and I plan to do that through my music after hours.”

Guests and vendors venturing into Harlan for the pop culture and horror convention say events like Haunt Fest are good for the community. Thomas Marcum, a cryptid and Bigfoot researcher who will be set up at Haunt Fest, said people from far and wide enjoy the more mysterious things in life, which events like Haunt Fest center around.

“These types of events are definitely positive for our area,” said Marcum, who lives in Pathfork, and who heads up The Crypto Crew research team. Marcum is also a popular author on Amazon who sells his books and films about Bigfoot. “Getting people to our area is the key to growth for us, and these events are good tools to get people here. And besides all that, these events are just plain, old fun.”

Tennessee resident Jonathan Michael Scott, who is part of the Smoky Mountain Ghostbusters team that frequents events like Haunt Fest throughout the nation, pointed out that children especially loved coming to comic cons and horror conventions. His group, which dresses up in full Ghostbusters attire and even has an Ecto 1 vehicle, does not accept pay for appearances, but does, however, accept donations for children’s charities.

“We’re looking forward to coming to Harlan and enjoying the day with everyone at The Harlan Center,” said Scott. “We have members who have been doing this for five years, and we get just as much enjoyment out of it as the people who come and see us. Our goal is to bring smiles to fans of all ages.”

While much of Haunt Fest is centered around fun and frivolity, there are serious components to the event, as well. Expert paranormal lecturers will be present Saturday to talk about their research in the unknown. Lori and Ron Coffey, one of the top husband and wife paranormal research teams in America, will be presenting a lecture at 10:30 a.m. titled “Animal Ghosts And Cryptids.” Ron Coffey is considered one of the foremost authorities on the American Werewolf and has also served as a consultant on several documentaries. Both Ron and his wife have appeared on television shows such as the Sy Fy channel, and the Travel And Entertainment channel.

Morehead resident Joe Clark, who is one of the top paranormal investigators in the world, will be attending Haunt Fest. He will also be presenting a lecture at 3 p.m. about his paranormal research and experiences. Clark is a certified ghost hunter and freelance investigator. He has investigated some of the most haunted and most prestigious places as well as numerous residencies in Kentucky, Ohio, Illinois, Indiana and West Virginia.

Clark will also be leading a paranormal panel discussion after his lecture at 3 p.m.

When the lectures, contests, exhibits, and meet and greets are all over, music and dance will fill the interior of The Harlan Center as Haunt Fest concludes with a masquerade, special performances, and dinner. The headlining bands are high school and college students, who bring youthful energy to the stage, but polished performance abilities, too. Collins will take the stage at 9 p.m. She said her fascination with playing music began when she was 11 years old after learning to play guitar from her father, Mike Collins, who performs in the popular KISS cover band Dress To Kill. Mike also frequents Haunt Fest with his family, who all dresses up for the annual convention.

While Collins’ favorite genre of music is rock, she draws upon a wide variety of artists — classic and modern — for her performances. Collins said that when performing, she chooses well-known classics that may not be typically heard in hopes of giving the audience a memorable experience that they may not get with other acts.

At 10 pm, popular area band Mandela will take the stage. Mandela is a five-man band consisting of Cody Howard, Parker Eads, Brian Seiber, Logan Turner, and Jacob Manley. The band formed when five friends came together to have fun and share their passion of music with the public. The band members come from varied musical backgrounds. Eads is the son of renowned Stoned Age drummer Junior Eads. Manley began his musical journey in his elementary and high school choirs, and Turner, Seiber, and Howard became interested through musical inspiration and natural curiosity. Although their musical tastes and influences differ, Mandela agrees to focus on alternative rock, making it a mission of the band to “keep rock alive.”

“Music is more than just a hobby with us,” Eads said. “The future for Mandela has no limits. We’re going to be as big as anybody. Regardless of how we get there, we’re going to make it happen. But — in the meantime — we’re gonna rock it out at this year’s Harlan Haunt Fest. Come see us !”

Mandela will be performing until midnight when Haunt Fest officially closes. Only a $10 entry fee gets people in the front doors to enjoy the all-day and all-evening activities. For more information about Haunt Fest, log onto www.harlanhauntfest.com.