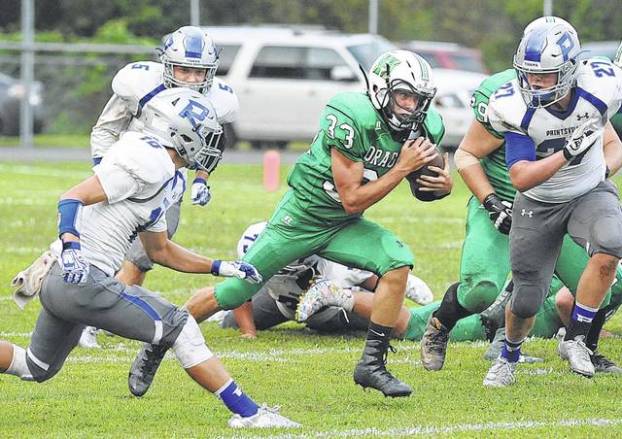 Harlan junior tailback John Brady Brock found a hole in the Paintsville defense during action earlier this season. The Green Dragons face another tough test Friday at home against Williamsburg.

With a senior-dominated Williamsburg squad heading to Harlan on Friday for the Class A district opener for both teams, you can be sure that many of the Yellow Jackets remember their last trip to Harlan County.

Coming off two straight Class A state runner-up finishes, the Jackets watched their string of district titles come to an end with a 28-19 loss on a rain-soaked field at Joe Gilly Stadium. Harlan went on to win its fourth district championship.

“I don’t think we have to remind them. They lived it,” said Williamsburg coach Jerry Herron. “A lot of times you get over here this time of year and the field conditions are subpar because of the mud. I hope that won’t be the case this year. Our kids have to be able to handle the physicality of Harlan.”

Williamsburg recaptured the district title last season, beating Harlan 30-8 along the way, and enters this season as the favorite to repeat, but the Jackets know winning at Harlan is not usually an easy task.

“We’ve had to handle some adversity, but our kids have adjusted well,” Herron said. “We’ve played a very difficult schedule against three top 10 teams in a row. We won one of the three. Our kids are excited to be back in district play. Harlan is always a big rival for us.”

The Jackets always play a tough schedule and have dropped two straight, falling 53-21 at Paintsville and 39-28 at Ludlow in their last two games. Like Harlan, Williamsburg (3-3) has had two weeks to prepare for the game.

“They don’t have the Fred Masseys or Skylar Griffiths of the past. We match up with them,” Luttrell said. “I kind of like us being under the radar and having a rough start just enhanced that, but I do think we’ve gotten better every week. We’ve had two good weeks of practice and I’m really anxious to see what we put on the field. Our kids seem like they’re ready and want to play. I told our kids that to put the team and program where it needs to be you go into the season expecting to win championships, not hoping to win championships. I think there is a lot of parity in our district this year.”

Williamsburg has featured an air-oriented offense for several seasons and that’s still the case this year with senior Alec Poore completing 105 of 202 attempts for 1,576 yards with 20 touchdowns and 11 interceptions. Senior receiver Darrell White is first in catches with 47 for 569 yards and 10 touchdowns. Eli Mattingly has 19 catches for 411 yards followed by Dalton Ponder with 16 catches for 253 yards and Devonte Powell with 10 catches for 1,186 yards.

“They’ve not changed. They do what they do and are real efficient at it,” Luttrell said. “They want to run the football, but the main thrust of their offense is passing. (White) is their main receiver. He has good size and has made some great catches.”

Kyle Davis leads the Jackets in rushing with 355 yards and five touchdowns. Poore is close behind with 329 yards.

“(Davis) was hurt against Paintsville, so they moved their receiver (Poore) to running back. He’s their best athlete,” Luttrell said.

Hunter Brown, a junior linebacker, is first on the team in tackles with 34. Mattingly and Cody Maxey are next with 23 and 20 tackles, respectively.

While Williamsburg has lost two straight, Harlan (2-4) brings a two-game winning streak into the game with victories at Magoffin County and Jenkins.

The Dragons feature a ground-oriented attack led by senior fullback Kendal Brock, a 1,000-yard rusher the last two seasons who has been slowed by a knee injury this year. Junior John Brady Brock has also had a good year and led the Dragons in their 64-0 win at Jenkins with 93 yards on seven carries. Junior quarterback Kilian Ledford completed all three of his passes for 61 yards. Junior receiver Will Varner had a touchdown catch against the Cavaliers and has 16 of the team’s 22 receptions for the season.

“They are a well-coached team like always. They like to run the ball and are physical. They have things rolling,” Herron said. “We have to be able to take what they give us. We have to execute and be able to handle physical football and make some stops on defense.”

Harlan received some good and some bad news this week on the injury front. Kendal Brock was back at practice and is expected to play against Williamsburg. Junior receiver Caleb Adkins is not expected back until the playoffs due to a shoulder injury that sidelined him the last two games.

The Harlan County Lady Bears’ streak of Area 9 cross country titles will come to an end one day –... read more