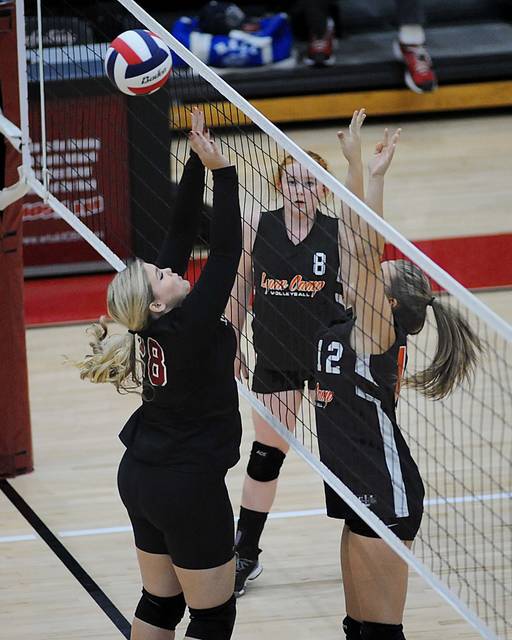 Harlan County senior Chelsey Noe went to the net for a point during a victory Monday over visiting Lynn Camp. The Lady Bears’ eight-game winning streak came to an end Tuesday at Knox Central.

The loss ended an eight-game winning streak for Harlan County, which closed its regular-season schedule with a 14-6 record. The Lady Bears will be out of action for two weeks before the district tournament begins.

“Our effort was there all night, and the girls played hard, we just didn’t serve the ball as well last night,” said Harlan County coach Stacy Noe. “When we are on serving we can be competitive with anyone and when we don’t, we won’t be. That was a great test for us heading into the district tournament though, and we have some things we can build off of. We are going back to work for the next week and a half to prepare for Middlesboro and just take it one game at a time.”

“We have to stay focused every play of every game and if we do that we can compete with anyone,” Noe said. “When the girls are talking and refusing to lose it will make us a very hard out for anyone we play.”

Harlan had a seven-game winning streak of its own earlier in the season, winning the 13th Region All “A” Classic and clinching the top seed in the district tournament in the process, but the Lady Dragons have struggled of late against a tough schedule, losing six straight. The Lady Dragons fell 25-18, 25-21, 25-15 on Tuesday at Leslie County. Harlan lost 25-10, 25-14, 25-6 on Monday at Letcher Central.

The 12-18 Lady Dragons play host to Williamsburg on Thursday. Harlan will be at home against Knox Central on Monday, then travel to Lynn Camp on Tuesday and play Lynn Camp at home on Thursday to close the regular season.

The Harlan County Lady Bears started the 2017 season on a hot streak and it looks like they are going... read more