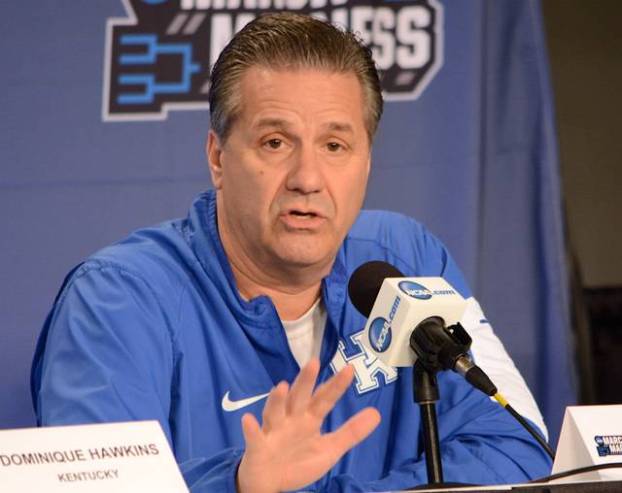 Kentucky coach John Calipari will be entering his ninth season as coach of the Wildcats and likes the make-up of his current squad, which features a lot of size.

LEXINGTON (KT) — John Calipari knows what he is getting into this season. Although the Kentucky coach is used to a roster stocked with newcomers, this time it’s different with no seniors and seven freshmen being counted on to carry the load.

Aside from sophomore Wenyen Gabriel, whom Calipari said is “playing way better” than he was a year ago, and Hamidou Diallo, the team’s heralded incoming class hasn’t separated themselves on the court just yet.

“The other guys seem to be freshmen,” Calipari said.

Many of those newcomers have size, giving the Wildcats more length on the floor, but the major difference from the past five years will be Kentucky’s lack of experience and depth at point guard. Quade Green will be counted on to fill a role vacated by De’Aaron Fox, without the luxury of an experienced backup.

“Last year, we had, like, three point guards on the floor almost all of the time,” he said. “Now, you’re going to have either one, or none that are, like, true point guards. That’s going to be the biggest change. So you might have a team of where it seems the basketball is going to no point guard and no center, just players. So now, it’s like, that’s different than what we’ve had. You know for the last few years, it’s been three guards and literally three point guards.”

Calipari said the Wildcats will “look different in how we’re playing” this season. The Kentucky coach also plans to keep his traditional fast-pace style with some new wrinkles mixed in to allow more movement without the ball. He added “there are things that we’re going to have to teach that I haven’t done before here, with this team.

“You’re still playing fast, playing unselfish (and) we should be a pretty good defensive team if we choose to be, but (the biggest question is going to be) how we play offensively,” he said. “I’m in the process right now of meeting and talking with some NBA guys about (playing) away from the ball. We are a spacing offense. That’s good and we’re not changing that. But, you also have to be a movement offense now. “

In the past, Calipari hasn’t embraced the zone defense, but added he may have no choice, considering the team’s current structure, especially in the low post.

Breaking with past tradition will indeed be a change for Calipari, but on the flip side, the Kentucky coach doesn’t have to worry about old habits.

“If we’re playing away from the ball different than we have, then the good news is, none of these guys know,” he said. “It’s not like I have a whole team that I’m trying to change, it’s a new canvas and this is what I want this to look like. I’m not sure it will be right, but we’ll try it.”

Calipari also has been spending time in the preseason getting his team to understand “none of them are there yet” while making the transition from high school to college.

“If you think you are (there), you’re delusional or you really don’t want this and, like, you don’t want to work,” the Kentucky coach said. “The guys are where they need to be. This is going to be one of those season-long, we’ve been through it before. It’s hard to be patient for me, our fans and everybody else, but you guys are going to have to be. We’re not even going in knowing how we’re going to be playing in February and March. We won’t, but we’re talented (and) we’ve got a great group of kids again. We have that, but individually, they’re not there yet. Collectively, obviously we’re not there yet.”

Although the newcomers are just to being “the best player on their high school team that took all the shots” Calipari said they’re getting used to a team environment and willing to learn how to become one.

“They’re attentive (and) they want to be coached,” he said. “They want to win. It’s just going to be that road that we usually take here (and) it’s going to be hard.”

Calipari compared his current team to the 2013-14 squad that reached the Final Four despite enduring a roller-coaster ride during the regular season. It was a late-season tweak that awoke a sleeping giant, one that lost to Connecticut in the national championship game.

“You have a talented group of kids, but they’re not ready to win basketball games,” he said. “They’re exchanging baskets. That’s where this team is. Hopefully because I’ve been through it. … that’s like saying, OK, good. You’ve been through a root canal, you can do this again, right? You’ll be better prepared and you will be fine, you know it’s coming, no. It’s still going to be painful.”

As far as leadership, Calipari said it will develop from within the camp as the season progresses and gets into full mode.