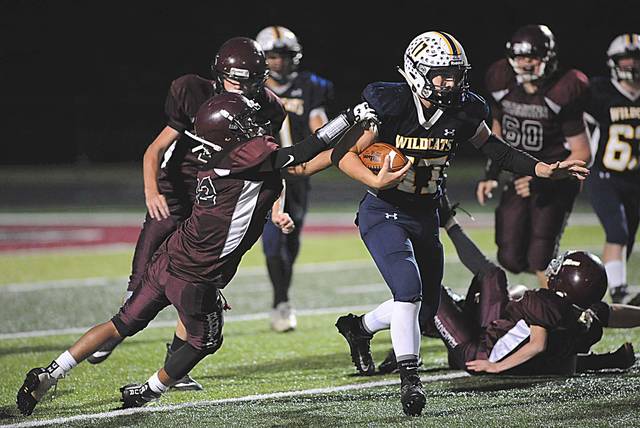 Triston Cochran broke free for one of his four touchdown runs as Evarts won the Southeastern Football Conference championship with a 42-22 win over Cumberland.

Triston Cochran and Jayden Ward have been a potent 1-2 combination in the Evarts backfield during one of the best Clover Fork football falls in recent memory.

Those two were the stars again Saturday, teaming for six touchdowns as the Wildcats rolled past Cumberland 42-22 in the Southeastern Football Conference championship game at Coal Miners Memorial Stadium. Evarts (7-2) took control in the opening 12 minutes, racing to a 30-0 lead behind a powerful ground game under the direction of quarterback Bruce Burgan.

The Wildcats, now 7-2, will play host to Somerset Meece on Oct. 14 in the state playoffs.

“I’m so proud of my kids. I’ve coached this bunch since fifth and sixth grade, so this is three years in the making,” said Evarts coach Ryan Sawyers. “I told them back in the spring we had two goals — conference champs and a home state playoff game, and the boys have gotten both. We played great football on both sides. I couldn’t ask for a better team.”

Cumberland drove into Evarts territory before Burgan broke up a pass on fourth down. Cochran went 92 yards on the next play and Burgan followed with a two-point conversion for a 14-0 lead with 4:19 to play in the first quarter.

Ward had two first downs and Cochran added one after Dylan Middleton recovered an onside kick. Ward went the final 3 yards and Burgan followed with the two-point conversion for a 22-0 lead with 54.9 seconds left in the period.

An Austin Tindell interception set up the next Evarts score, a 43-yard run by Ward with 4:18 left in the second quarter.

On the verge of a running clock, Cumberland fought back with three touchdowns in the final four minutes of the half.

Cochran raced 85 yards for a touchdown as Evarts answered and extended its advantage to 36-8.

Gist took the ensuing kickoff back 70 yards for a touchdown and Swanner followed with a two-point conversion that cut the deficit to 36-16 with 20.3 seconds left in the half.

Cumberland (3-7) recovered an onside kick, then scored on the next play when Blakley teamed with Donovan Simmons for a 46-yard strike over the Evarts secondary, cutting the deficit to 36-22 at halftime.

Scoring slowed considerably in the second half with Cochran going in from the 6 with 7:13 left in the game for the 20-point margin.

New Harlan (6-3) avenged two losses in the regular season, including a 22-0 blowout at Cumberland early in the season, to capture the fifth- and sixth-grade title with a 20-14 overtime victory.

Samuel Henson teamed with Jared Rhymer for a 4-yard touchdown pass on third down in overtime. Henson was stopped by Shawn Carroll on the two-point conversion attempt.

Henson preserved the win when he picked off a pass in the end zone on fourth down, his third interception of the game.

Cameron Anderson gave Cumberland an early lead when he went in from the 4, picking up his own fumble along the way. Darius Akal added the two-point conversion for an 8-0 with 5:13 left in the second quarter.

Rhymer raced 56 yards to set up a New Harlan touchdown. Darren Alred went in from the 1 on the next play and Bryan Howard followed with the tying two-point conversion.

A Cumberland fumble on its own 3 set up the next New Harlan score as Noah Brewer went in on the next play as the Patriots led 14-8 with 34.6 seconds left in the third period.

Akal answered as he raced 51 yards with 19.2 seconds to play in the third quarter. Brayden Hensley made the stop on the two-point conversion.

Cumberland (5-3) threatened to take the lead when Dionta Long teamed with Cameron Anderson for a 25-yard gain to the New Harlan 32. Henson picked off a deflected pass to end the threat.

“It was a hard fought battle and our boys played hard and as a team and pulled it out,” said New Harlan coach Russell Alred. “I’m proud of our effort and the result. Cumberland played a great game, and I compliment them and their coaches.”