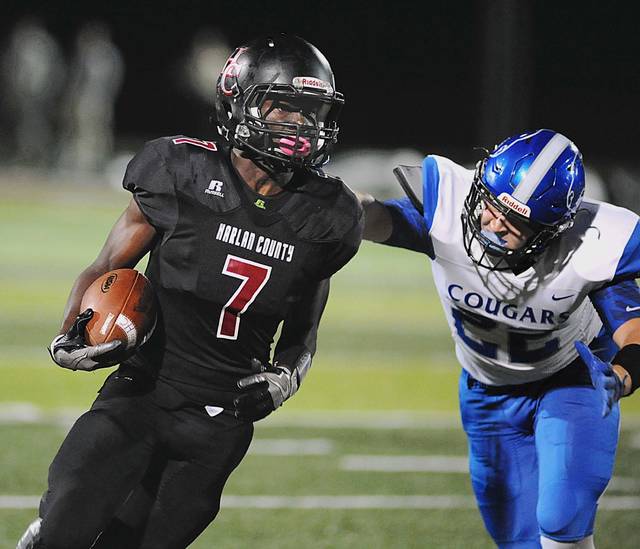 Harlan County senior receiver/running back Tyrese Simmons broke free for a 44-yard touchdown run during the Black Bears’ 54-6 rout of visiting Letcher Central on Friday in the Coal Bowl.

With a four-game losing streak and an injury list that featured most of their top players, the Harlan County Black Bears appeared to be on the cusp of disaster two weeks ago.

Two district wins later, the Bears are heading in the opposite direction and feeling much better about themselves. Harlan County followed a 23-13 win last week at North Laurel with a 54-6 rout of visiting Letcher Central on Friday in the Coal Bowl.

Eight Bears reached the end zone, but none more than once, as Harlan County improved to 3-4 overall and 2-0 in district action.

Junior quarterback Colby Cochran, who moved into the starting lineup four weeks ago when senior Jacob Branson went down with a shoulder injury, completed all eight of his passes for 173 yards and three touchdowns.

“The thing about Colby is he’s growing each game and practice,” Creech said. “You can see his confidence level growing up. He will be a pivotal part of our offense going forward.”

Colby King burned a Letcher defense focusing on the run by getting behind the secondary for a 54-yard touchdown pass on the Bears’ opening offensive play. Marcus Kelly tacked on the first of five extra points in the first half. King finished with three catches in his best game of the season.

“Colby is one of the most dangerous weapons we have. It was good to see him break out of a slump and get that early touchdown,” Creech said. “We though Letcher would stack the box against some of our heavier sets and give us some one-on-one matchups. Colby blew past his guy and Cochran put it there.

The HCHS defense came up with a big play four plays later as senior tackle Ethan Baird picked up a fumble and went 45 yards for a touchdown. Kelly’s second kick pushed the lead to 14-0 with 8:39 left in the second quarter.

Harlan County needed only three plays to score again as Tyrese Simmons caught a swing pass 44 yards for a touchdown. Kelly’s extra point made the score 21-0 with 4:26 to play in the opening period.

Letcher Central followed with a nine-play drive before being forced to punt. Senior tailback Quintin Mickens had seven straight carries covering 51 yards, scoring on a 1-yard run with 10 minutes left in the second quarter.

Cochran teamed with Devon Rodrigues for a 19-yard touchdown pass with 7:51 to play in the second quarter for a 34-0 lead. Mickens was stopped as the Bears went for the two points that would have started a running clock.

The Bears started the clock moving on the next drive after stopping the Cougars on fourth down at the HCHS 21. A 36-yard screen pass to Mickens and a 10-yard pass to Rodrigues set up a 45-yard touchdown pass to Caleb Carmical with 2:40 left in the first half. Kelly’s extra point gave the Bears a 41-0 halftime lead.

Letcher recovered an onside kick to start the third quarter, but the Cougars were stopped on the Harlan County 43 on a hard hit by King on fourth down. Christian Hall raced 53 yards two plays later for a 47-0 lead midway through the third period.

Letcher (0-7) avoided the shutout when Hunter Campbell broke a tackle and went 90 yards for a touchdown on the ensuing kickoff.

Harlan County was penalized eight times for 85 yards in the first half, one of the few negatives in an otherwise impressive effort.

Harlan County (3-4) will be open next week before traveling to Whitley County on Oct. 13. The Bears, who are 2-0 in district play, could be in position to win the district title.

“We could, but right now we’re trying to improve game by game,” Creech said. “We control our own destiny and we have to take it one play at a time.”