Annual Harlan convention is not just for zombies 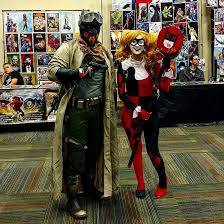 One of the most popular draws of Haunt Fest is for people of all ages to dress up as their favorite comic or horror character.

(Editor’s Note: This is the first story in a series about one of Harlan County’s newest and fastest growing festivals.)

It’s not every day a zombie from The Walking Dead comes to Harlan, but when it does it is followed by a whole host of horror film haunts, superheroes, comic book characters, and even a more serious entourage of science fiction authors and paranormal researchers.

Jeremy Ambler, who is best known as the co-leader of the “highway walkers’ on season two, episodes one and 13 of the highly popular AMC show “The Walking Dead,” is just one of several guests who will be on site at this year’s Harlan Haunt Fest, taking place on Oct. 7 at The Harlan Center. Now in its fourth year, Harlan Haunt Fest is a pop culture/horror convention and festival appropriately set in “the deep dark hills of Bloody Harlan” which features genre celebrities from film and TV plus music, art, literature, special events, contests and crafts.

“Harlan Haunt Fest is one of my favorite places to come,” said Ambler, whose likeness is used on 95 percent of AMC’s Walking Dead merchandise. He was also most recently included on the Walking Dead edition of Monopoly. “I participate in several Comic Cons and Horror conventions, but Harlan is particularly exciting to attend because the people there are just so friendly and fun to be around. I love meeting the people and fans there. Harlan Haunt Fest is most definitely a must attend on my schedule of appearances.”

Harlan Center and Tourism Director Brandon Pennington said Harlan Haunt Fest was one of the county’s most popular events, and he and his staff look forward to it every year.

“All of us out here at The Harlan Center have grown fond of Harlan Haunt Fest as it is expanding each year,” Pennington said. “We look forward to all of the cool people and events that the Haunt Fest brings to The Harlan Center. It brings something new and fresh every year, and it’s something for the entire family to come out and enjoy.”

Austin Rutherford, a local filmmaker and horror enthusiast, has been a Harlan Haunt Fest guest in the past. He said not only was the event enjoyable for people to attend, but was also beneficial for the guests.

“Haunt Fest is the only horror convention in our community,” said Rutherford, who showcases his handmade horror mask collection and special effects makeup artistry at the event. “I enjoy being a guest every year because even though I’m local to Harlan, I always enjoy meeting new people and networking with the other guests for future collaborations and projects.”

According to Harlan Haunt Fest founder and owner Earl McKinney, the annual convention started as an idea to bring a Comic-Con-type gathering to the area that leans more toward a “Horror-Con” because of Harlan’s rich history of hauntings, legends, and myths.

“We have some great celebrity guests from film and TV, artists, authors and musicians who come to Harlan and help us celebrate all those cool things in which almost everybody is interested,” McKinney said. “Haunt Fest is a community of people who share our interests in pop culture and who want to help bring more notice to our beautiful mountains by creating this festival. We hope it will continue to grow and get more people involved so in the future we can have many more events surrounding Haunt Fest during the month of October and make Harlan known as a destination Halloween town.”

Musical guests include Harlan’s own Brooklyn Collins, Random Rock Radio, and Mandela. A wide variety of artisans, crafters, and food vendors will also be on site, including Goth Cakes by local photographer and writer Jennifer McDaniels, who will have a beautiful and enchanting spread of gothic-themed cupcakes for sale.

According to McKinney, one of this year’s Harlan Haunt Fest highlights is the premiere showing of a documentary that was filmed in Harlan this past summer called “Harlan County’s Manzo Shepherd Story.” Felosi, a local paranormal researcher, was behind Creepy Attic Productions coming to Harlan for the filming which depicts a brutal courtroom murder in the early 1940’s. The film debut, plus a round table discussion pertaining to the making of the film, will take place at the end of the event.

“Harlan Haunt Fest is a big draw because it’s professionally ran by people who genuinely care about their town and want to bring the big Comic-Con experience to a smaller venue for an affordable price,” Felosi said. “What people will enjoy most about Haunt Fest is the diversity. You will be able to meet everyone from pro wrestlers to authors and artists, cosplay personalities, paranormal groups, Bigfoot researchers, and the list goes on and on. There is truly something for everyone, and it’s one hundred percent a family friendly environment. “

More information about Harlan Haunt Fest 2017’s guests and scheduled activities will be included in the upcoming series about the annual convention that will be published in The Harlan Daily Enterprise. For a complete listing of Harlan Haunt Fests’ guests, events, contests, musicians, as well as craft and food vendors, log onto the event’s website at www.harlanhauntfest.com.