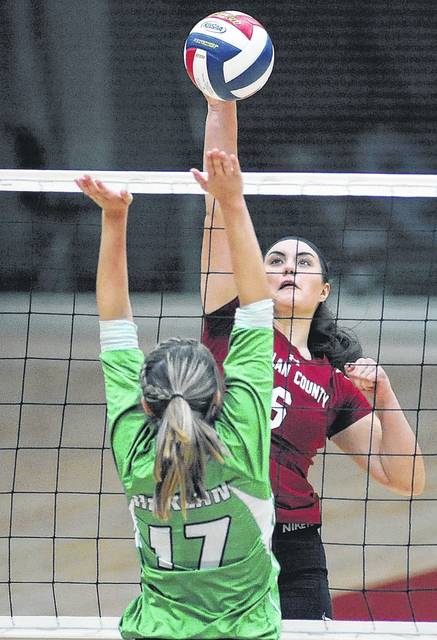 Harlan County senior Miranda Cook went to the net to finish a point in action earlier this season. The Lady Bears extended their win streak to seven with a victory Tuesday over Pineville. HCHS will close its home schedule Monday against Lynn Camp.

“We got off to a slow start in the first set and were playing not to lose instead of to win,” said Harlan County coach Stacy Noe. “This may have ended up being the best game we had played all season though, as everyone stepped up and played hard all night long. We are on somewhat of a little streak right now.”

“She has really taken over a leadership role out there and is talking and keeping the team on task,” Noe said.

“Emily is really coming in to her own and is proving to be one of the top players in the district,” Noe said. “If she continues she can be as good as she wants to be.”

Chelsey Noe led in assists with 10. Olivia Minor, Krista Burke and Kimber Collins also played well for the Lady Bears, according to Noe.

“Krista can be one of the best servers in the district when she wants to be, and we are going to need that the rest of the way,” he said.

Harlan County (13-5) will close out its home schedule Monday against Lynn Camp, then travel to Knox Central on Tuesday.

“Sometimes we get complacent and relaxed and just don’t concentrate, and we have to fix that before tournament time,” Noe said.

“I was impressed with the way we came out against Williamsburg, who is a scrappy team with good athletes,” Noe said. “Miranda Cook really stepped up big in her leadership role in all three games today. Emily and Chelsey worked good around the net also and Krista and Kimber played big for us as well.”