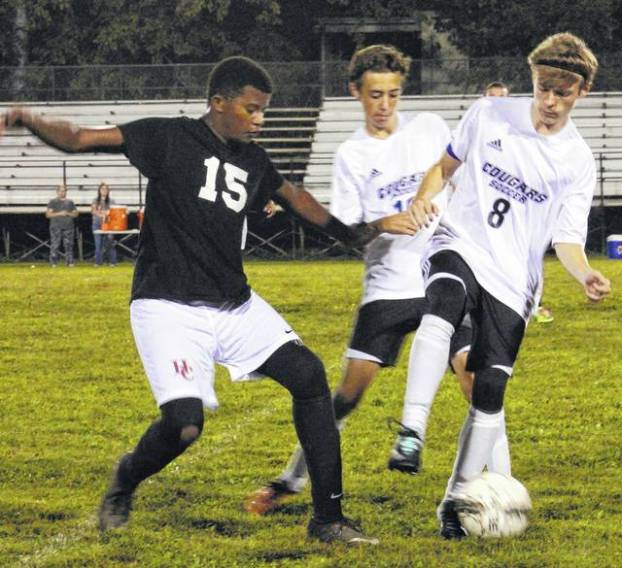 Harlan County’s Bitty Foster battled with a Letcher Central player for possession of the ball during a match Tuesday at the James A. Cawood field.

HCHS, Letcher play to a pair of ties

Harlan County took the lead three times, but Letcher Central answered on each occasion as the Bears and Cougars played to a 3-3 tie on Tuesday.

Marcus Kelly scored the first and second goals for the Bears. Johnny Brock scored the third and final goal.

The Black Bears lost 4-2 on Thursday at Perry Central. Kelly and Hunter Mefford scored goals for the Bears.

Harlan County (1-7-1) will close its regular season schedule Saturday at home against Estill County at noon.

The Harlan County Lady Bears avenged an early season 8-1 loss with a 1-1 tie against Letcher Central on Tuesday.

“We played much better this time around,” coach David Day said. “When we went there we played well at times, but we had too many breakdowns. Tonight, we marked two of their girls (Samerrah Frazier and Rebecca Johnson). Frazier had a great game against us over there, so we decided to mark her tonight also. It hurt our offensive push, but they had problems scoring because of it.”

The Lady Cougars started the scoring late in the first half when Johnson found a little space and blasted a left-footed shot that found the net. They missed another opportunity to put the game away late in the second half when a penalty kick went wide of the net.

Harlan County capitalized on one of its scoring chances with about eight minutes left in the game when LCC’s goalie left the goal to challenge for a ball. Harlan County’s Madison Blanton won the ball and put it across the front of the net where Hayley Key was waiting to finish the play.

“We played with energy and determination. This game is how we need to play when it comes to district and regional time in a couple weeks,” Day said.

Harlan County was scheduled to play at Perry Central on Thursday, but that game has been canceled. The Lady Bears will end the regular season on Tuesday when they travel to Whitley County.

With half the starting lineup battling back from injuries and in danger of losing their fifth straight game, the Harlan... read more