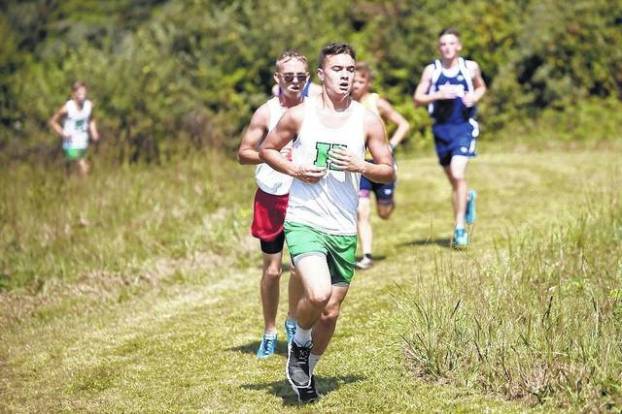 Harlan’s Tate Bryson headed toward the finish line in a recent race at Corbin. Both Harlan and Harlan County runners competed in the Wayne County Invitational on Saturday in Monticello.

A month into the 2017 cross country season, the Harlan County Black Bears have identified their mission. Coach Ryan Vitatoe saw their performance Saturday at the Wayne County Invitational as another step toward fulfilling those objectives.

The boys squad took fourth place behind another strong performance by senior captain Alex Lewis, while the girls overcame yet another injury to finish strong.

Lewis finished sixth in the boys race, setting a new personal record with a time of 18:18.71.

“This was by far the best race of Alex’s career, and the best race Josh has had since last season,” Vitatoe said. “One of the secrets of success is believing you belong; once you believe that, success follows rapidly. Today, Alex and Josh proved they could compete with the best guys this region has to offer, and our boys are getting closer to proving that as well.”

“I thought we made significant process on the boys side today,” Vitatoe said. “Our three middle school guys are beginning to creep close to the place that I need them to be by the end of the season. Cooper had a fantastic race today, as did Yeary. Daniel has been consistently our fifth guy, but today I saw those three start to push each other more to get closer to our fourth guy, and that’s a big positive for us.”

Madison Central and Pulaski County, both regional opponents for the Black Bears, finished first and second, respectively, in the race. Madison Central’s Conner O’Shea won with a time of 17:17.64.

Harlan sophomore Lucy Bryson was the top local finisher in the girls race, coming in 19th with a time of 24:43.01.

“I thought we had several girls run well today. It’s hard to know what we have because we haven’t run our full varsity group together since the Pulaski meet (in late August),” Vitatoe said. “I know we have some tremendous talent and potential on our roster; I’m just anxious to put them all on the line together to see how we jell. I’m hoping that happens by Saturday.”

The Lady Bears finished seventh in the race. Madison Central and Pulaski County also finished first and second in the girls race, collectively accounting for seven of the top 10 finishers. Madison Central’s Abby Hill was the winner with a time of 20:26.73.

The Bears will return to action Tuesday at Middlesboro before hosting the Black Bear Invitational and Area 9 Championships on Saturday.