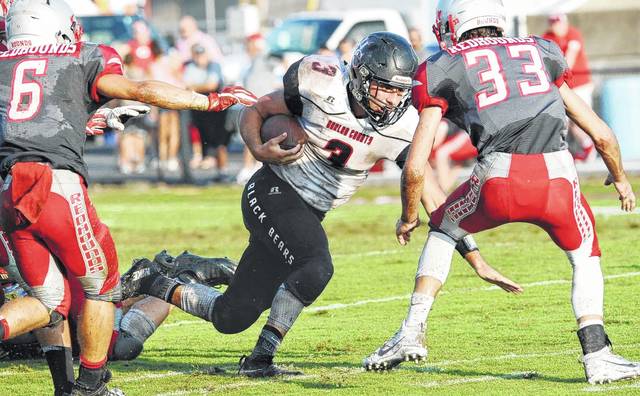 Harlan County senior running back Christian Hall battled for yardage in action earlier this season. Hall, who starts at outside linebacker, was one of several HCHS starters out last week due to an injury and is questionable for Thursday’s district opener at North Laurel.

After opening the season with an impressive win over 4A power Ashland Blazer, the Harlan County Black Bears have suffered through an ugly month of football that has included four straight losses and an injury list that seems to grow by the week.

Harlan County (1-4) will have a chance to put some of the bad memories of the last four weeks behind them on Thursday. The Black Bears travel to North Laurel to begin their Class 5A, District 8 schedule.

“Everybody in our district is 0-0 starting Thursday and trying to start the second half of the season with a win,” said Harlan County coach Eddie Creech.

The Bears have had as many as a half dozen starters out the past couple of weeks due to a rash of injuries, but the situation appears to be improving as Creech targeted the district opener as the date he hoped everyone could return. Receiver Tyrese Simmons and running back Quinten Mickens were cleared to play the day before last week’s loss to Wayne County. Quarterback/cornerback Jacob Branson, outside linebacker Christian Hall, offensive tackle Andrew Baker and cornerback Paul Stapleton missed the game and were still questionable earlier this week.

While Harlan County’s play has dropped with key players out, Creech says he isn’t blaming the injuries for the Bears’ struggles.

“We don’t look at our injuries as affecting our wins and losses. We have quality players A to Z,” he said. “I have to do a better job preparing my team to win ball games. These losses are on me, not our players.”

The Bears will face a tough test against a 4-1 North Laurel squad that won its first four games before falling 16-14 to Somerset last week.

“Their size and strength impress me. They are probably as big and strong as any team we’ll see this season,” Creech said.

“I think we have played pretty good to this point, but we still have a lot of work ahead of us,” said North Laurel coach Chris Larkey.

The Jaguars are a senior-dominated team with a balanced offensive attack. Running backs Jose Rodriguez and Matt Sizemore lead the team in rushing with 438 and 404 yards, respectively. Quarterback Cole McWhorter is close as he has gained 361 yards, while completing 26 of 44 passes for 522 yards.

“We definitely have to stop their run game. They are very efficient in what they do,” Creech said. “Their quarterback is an impressive runner on boots, play action and broken plays.”

Harlan County also features a run-oriented attack led by Mickens and Simmons. Junior Colby Cochran has taken over at quarterback with Branson out of action.

“Harlan County is a big physical team that is loaded with speed at the skill positions,” Larkey said. “I expect them to give all they have and play hard. They are one of the better teams we play.”

Linebacker Devon Banaszak, who had 103 tackles last year, leads the team at the midpoint of the season with 48 tackles. Rodriguez has 31 tackles and Sizemore has added 27.

“The keys for us to win are limit turnovers, win the special teams battle, tackle well and make the right blocks,” Larkey said.

Junior linebacker Garry Henson leads the HCHS defense with 26 tackles, followed by senior linebacker Caleb Carmical with 17 and Simmons and Hall with 14 each.