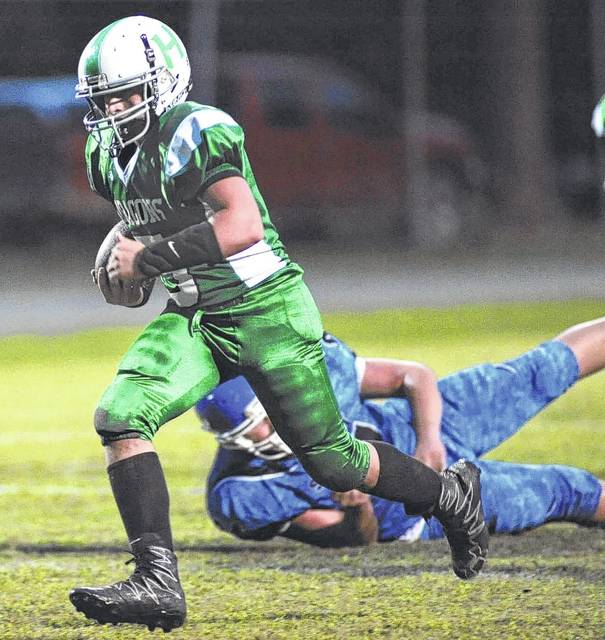 Harlan running back Luke Carr picked up a big gain in action earlier this season against Stinnett. Carr ran for 124 yards and two touchdowns on 15 carries in a 23-22 loss to Lynn Camp.

Lynn Camp rallied from a 15-point deficit to edge Harlan 23-22 in seventh- and eighth football action Thursday at Lynn Camp.

“We played hard on a hot day. We went up 22-7 and seemed to get complacent and started making mistakes. We had way too many penalties,” Harlan coach Chris Thompson said. “We have to learn to pour it on when we get a lead, but they kept fighting until the last seconds of the game. Things will get better.

Harlan fell 12-8 in the fifth and sixth-grade game.

The Dragons return to action Tuesday at home against Pineville.

New Harlan lost 42-2 to Middlesboro on Thursday in seventh- and eighth-grade action.

Middlesboro won 20-8 in the fifth- and sixth-grade game. Samuel Henson teamed with Noah Brewer for a 60-yard touchdown pass, then added the two-point conversion.

New Harlan lost 40-0 on Saturday at Pineville in a seventh- and eighth-grade game. Griffin had for 72 yards on five carries. Whitaker led in tackles with six, followed by Thomas Jordan with five.

Evarts lost 28-6 at Letcher Central in seventh- and eighth-grade action. Triston Cochran scored on a 3-yard run for the Wildcats, who dropped to 6-2.