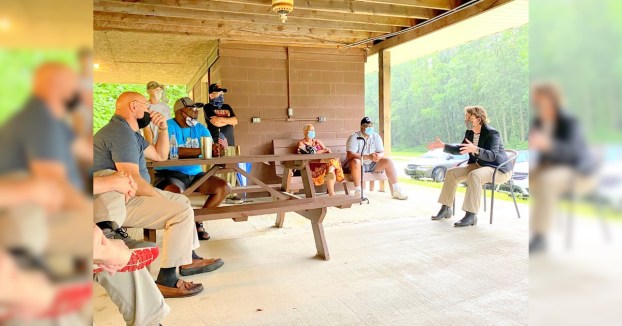 Amy McGrath, a Kentucky Democrat who is challenging Senate Majority Leader Mitch McConell, met with locals at the Coal Miners’ Memorial Park in Benham to discuss her strategy for progressing Harlan County through jobs and better economic structure. (Photo by Jackie Thompson)

Though it rained most of Tuesday, locals from across Harlan County met at Coal Miners’ Memorial Park in Benham to meet and discuss their future with Amy McGrath, who is running against Senate Majority Leader Mitch McConnell in the 2020 election.

McGrath said locals talked to her about needing a senator who “protects coal miners and pensions and benefits.”

“We talked about the need for a senator who wants to move us in the right direction so we have good, quality jobs here and how we bring that back,” she said.

McGrath said after 35 years of McConnell’s role as Senate Majority Leader, this region is worse off year after year and has been “left behind.”.

“This region powered our country, and we owe it back to the workers and the families to not only protect the benefits they earned, but to protect the future for their kids and grandkids,” she said.

McGrath said to protect the benefits of the workers and their families is the first step, adding they cannot be undermined by “throwing away Social Security and Medicare.”

She said the Black Lung Trust Fund needs to be “fixed,” too.

“In the two years he had all the power to make permanent tax cuts to corporations, he only worked on the Black Lung Trust Fund after there was significant pressure on him to do so and he only did it for one year,” she said.

McGrath said if she were to be voted in to unseat McConnell, she would put the work into fixing the trust fund for more than one year, working alongside members of both parties.

“Black lung claims have risen over 40 percent in the last decade. This is not going away, so we have to fix it,” she said. “Beyond that, I would do things like pass the RECLAIM Act, which is actually held up by Mitch McConnell right now.”

McGrath said the act is supported by Democrats and Republicans alike and would give $110 million to eastern Kentucky “for good, quality jobs, to clean up the environmental problems that have arisen from mining over the years, it would fund the Black Lung Trust Fund for a decade, at the very least.”

“These are things this region needs, the people know we need, and it is literally being held up by Mitch McConnell,” she said.

McGrath said to bring jobs into the area, each county would need to diversify with the help of their senator to invest in renewable energy jobs, tourism, manufacturing and the like.

“McConnell refuses to invest in us and our region,” she said. “We need real investments in roads, bridges, 20th century infrastructure, but also broadband, cell phone coverage.

“Businesses and manufacturing companies are not going to want to come unless we have the infrastructure for the globalized economy we’re already living in.”

McGrath said the region also needs investment in education, “the jobs of the future that are required.”

“Those things are very important, but we need to continue to diversify,” she said. “My very simple message for my fellow Kentuckians is to look around. In his 35 years, does it look like anything is getting better?”

McGrath also spoke about the COVID-19 pandemic and how it is financially impacting thousands living in southeastern Kentucky and the help needed to get locals through a time of crisis.

“We never should have been in the position that we’re in and that was a failure of leadership back in March and April, but we need help from local and state governments,” she said.

McGrath said Letcher County has a $150,000 shortfall for their budget, with Kentucky having a $400 billion shortfall for its budget.

“McConnell can bail out Big Business and Wall Street in April with a $500 billion trust fund for corporations to save them, but then he turns around and tells state and local governments to go bankrupt. That’s just going to crush us,” she said.

McGrath said a bill McConnell recently drafted did not have any money set aside for state and local governments. The unemployment, she said, should be continuous for those that are unemployed to help them through the pandemic.

“We need funding and a plan for national testing and tracing, and the fact of the matter is that we’re not going to get our economy back unless we metagame this pandemic,” she said. “I believe McConnell’s bill is woefully inadequate for what this country needs right now.”

McGrath said from the start of the pandemic, Gov. Andy Beshear has done the right thing by prioritizing public health, “which is why Kentucky has a better trajectory than almost any other state in the region.”

“I believe our governor is doing the right thing and, to his credit, he’s doing it even in the face of political pressure to do the opposite,” she said.

McGrath said it was evident at the meeting with locals that the residents’ feelings throughout Harlan County resonate with others across the region who feel it is this area’s time for attention to keep progressing toward new jobs, help in the pandemic, support for local coal miners and even in the fight against opioids.

Two Harlan County teachers were recently selected by the Kentucky Center for Mathematics to participate in a program for math... read more