A passion for learning 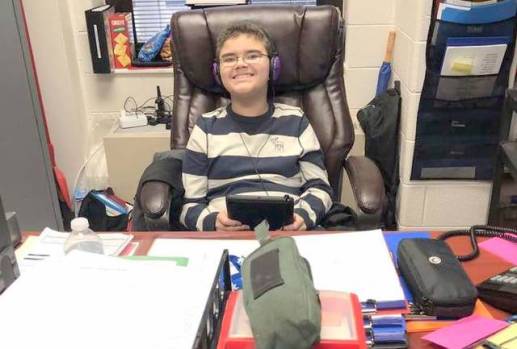 <p>Jeff Phillips | Harlan County Schools</p> <p>Although many students get excited about school being dismissed early or cancelled, Caden Lester is one rare exception. He often posts sad faces on Facebook when school is called off because he loves to learn and would rather be in a classroom than at home. Lester hopes to one day be an architect.</p> 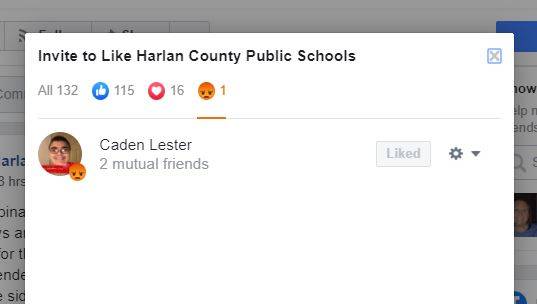 <p>Jeff Phillips | Harlan County Schools</p> <p>Although many students get excited about school being dismissed early or cancelled, Caden Lester is one rare exception. He often posts sad faces on Facebook when school is called off because he loves to learn and would rather be in a classroom than at home. Lester hopes to one day be an architect.</p>

You may have seen hundreds of likes and hearts on school dismissal or cancellation posts if you follow the Harlan County Public Schools Facebook page on a regular basis. However, we consistently earn a reaction of disapproval from at least one student for such posts.

Black Mountain Elementary School fifth grader Caden Lester is clearly disappointed and doesn’t care to let us know he disapproves when school is called off for inclement weather, illness, power outages, mechanical malfunctions or any other reason. He even disapproved of our early dismissal on Thursday.

Almost instantly when we post of a cancellation, Caden clicks the angry emoji, making him pretty much the exception as we get hundreds of likes and hearts from fellow students across the district.

Caden normally goes one step further, posting a selfie on his Facebook page noting his reaction of disappointment on those canceled school days.

We asked Caden about the marks he is giving us on our decisions and we really like what he has to say.

“I love school. I don’t want to miss,” said Caden. “I’m going to be an architect when I grow up so I need to be at school to learn.”

Caden informed us that he knows his absence impacts others at his school as well.

“I am an office worker and it’s hard on Mr. (Kenny) Hughes and Mrs. Kim (Kelly) if I’m not there to make announcements,” he said.

Hughes, Black Mountain’s assistant principal, gives Caden high marks for his dedication to his school duties and for his love for school.

“Caden received an office worker ID badge from me two years ago for his birthday. At 2:30 p.m. on the dot, you can count on him to be in the office ready to make our school announcements,” said Hughes.

“He has a very good memory about reminding us when our scheduled fire and severe weather drills are, too. I have no idea how he remembers the dates, but he does,” said Hughes.

Hughes said he has no doubt Caden “loves school and anytime school is not in session, he’s very sad because he misses his school family and friends very much. Caden has grown so much over the past three years that I’ve known him. He makes me a better administrator. He’s a wonderful help to us in the office.”

“I love math and I’m really good at it. Math is important for an architect,” he emphasized.

He said he “loves all the teachers” at Black Mountain. However, he quickly points out “Mrs. Stacie Kelly is my favorite because she makes math fun. She is the best ever.”

We asked if his reaction creates any sibling issues at home with his brother, Cameron, a student at Harlan County High School, who is glad to hear of school cancellations.

“Cameron loves snow days because he can sleep in, make videos or play Fortnite. He’s a teenager, said Caden.

Caden’s mom, Kristin, is the media specialist at Black Mountain, while his dad, Casey, teaches social studies at James A. Cawood Elementary School.