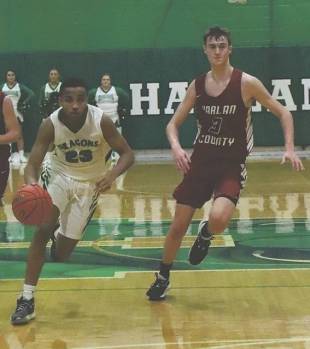 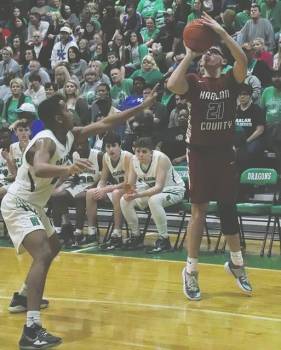 <p>Kim Henson | Harlan Enterprise</p> <p>Harlan County’s Jacob Wilson put up a shot in Thursday’s game at Harlan. Wilson scored 11 points, including two 3-pointers in the fourth quarter as HCHS rallied for a 64-61 victory.</p>

Trailing by 13 midway through the third quarter on Thursday, the Harlan County Black Bears were in danger of losing at Harlan for the first time since falling in the 2009 52nd District Tournament finals against Middlesboro.

The Bears recovered just in time, closing the third quarter with a 13-4 run to pull within four. Harlan County outscored the Dragons 23-16 in the final period on the way to a 64-61 win.

“We finally did what we were supposed to do to start the game. We put pressure on the basketball, covered the middle and played with effort,” said Harlan County coach Michael Jones. “Those were things we didn’t do for almost three quarters. It wasn’t an adjustment. It was their effort. We have to do that to start the game.”

Eighth-grade point guard Trent Noah helped ignite the comeback as he scored all 18 of his points in the second half to lead the 19-7 Bears, who finished their district slate with a 5-1 mark and improved to 42-3 in district competition over the past six seasons. Taylor Spurlock, Jacob Wilson and Tyler Cole added 13 points each.

Sophomore guard Jordan Akal led the 11-13 Dragons with 25 points. Akal, slowed by two sore ankles, hit his first five shots even though it was uncertain whether he was going to be able to play.

“It was a game-time decision on whether he was even going to play,” Harlan coach Derrick Akal said. “The fact he played and played as well as he did is a testament to how hard he works.”

Senior center Jon Eldridge added 19 points and 13 rebounds for the Dragons. Jaedyn Gist has 12 points and 11 rebounds. The duo combined to hit 12 of 14 shots in the first half as the Dragons built a 29-24 halftime lead.

“They are both good players, but we were letting Gist catch it too much in the middle,” Jones said. “It probably looked like we were letting him catching it there, but we weren’t guarding him. Then when he did catch we forgot 6-foot-4 Jon was standing behind us. It was a matter of getting in the right position.”

“I’m proud of our effort. We played hard and got some good looks,” Akal said. “We fought hard the whole time, but when you have freshmen and sophomores out there who haven’t been in this position they will make some mistakes. I wasn’t really concerned about that though. They fought for 32 minutes and just came up on the wrong side.”

Spurlock kept HCHS in the game in the third quarter with three baskets, including a jumper that started the 13-4 run late in the period. Noah had two quick baskets, then Spurlock, Wilson and Josh Turner added field goals to pull the Bears within four.

Wilson hit a pair of 3-pointers in the opening two minutes of the fourth quarter to pull the Bears even at 49-all. A free throw by Jackson Huff put HCHS up by one before Noah hit a 3-pointer and then followed his own miss with a basket for a six-point Harlan County lead.

“Before that happened, Taylor was doing a good job of attacking and getting in the lane and that opened it up for some shots,” Jones said. “Jacob hit two big ones and Trent hit a couple late. I was pleased with their effort overall. To be down 13 and fight back and win it with all the elements, I’m proud of their effort.”

Kaleb McLendon and Akal each hit 3-pointers to keep the Dragons close. Two free throws by Jaedyn Gist with 20 seconds left cut the deficit to one. Noah answered with 16.6 seconds left for a three-point lead. Akal missed on a potential game-tying 3-pointer as he tried to squeeze between two HCHS defenders just before time expired.

Harlan plays host to Lynn Camp on Friday. Harlan County plays at Madison Southern on Friday and Richmond Model on Saturday at 2:30 p.m.