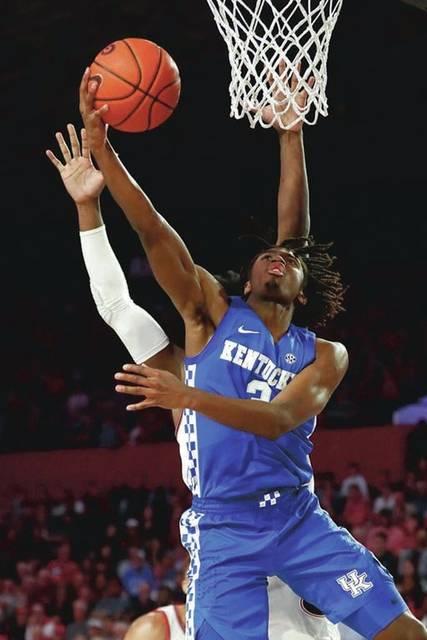 Kentucky guard Tyrese Maxey (3) went in for a shot against Georgia in the first half of Tuesday’s game. The Wildcats rallied for a 78-69 victory.

Kentucky survived its first true road game of the year and handed Georgia its first home loss of the season in Athens Tuesday night.

The 14th-ranked Wildcats (11-3, 2-0 Southeastern Conference) notched their third consecutive victory with a 78-69 win over the gritty Bulldogs. Georgia won its first eight games at Stegeman Coliseum this season and led 31-27 at the break, but Kentucky outscored the hosts 47-32 to get the win.

“It was a good (road win),” Kentucky coach John Calipari said. “Anytime you win on the road in this league, it’s big, especially when we’re walking into the gym and the students are back on campus for the first time (this semester) and it’s a sell-out. It was really hot in there. … I was soaked in there. Our kids fought it and won the game.”

Ashton Hagans scored 23 points in an easy 69-49 win over the Bulldogs a year ago, tallied 13 points in his second visit to Athens. Hagans graduated from nearby Cartersville and was Georgia’s Mr. Basketball two years ago.

“He is so confident and comfortable in his own skin that he and I are just laughing at halftime,” Calipari said. “He is laughing and I’m laughing and that’s how comfortable he is. He knows this is his team to run. He knows I’m giving him space because he’s making great decisions. … This guy is physically strong and tough uses it. He’s making good decisions.”

Hagans missed his first four shots and started shaky after suffering a low ankle sprain in Kentucky’s 71-59 win over Missouri last Saturday in the team’s Southeastern Conference opener. Hagans led the Wildcats with eight points in the opening half.

Nick Richards played just eight minutes in the first half and scored four points, but was active in the second half and finished with 17 points and seven rebounds. Richards had scored 51 points in the past three games.

“Some of the stuff that Nick is doing — dunking around the basket, that should be him,” Calipari said. “My goal by the end of the year, that’s who he is. He’s getting better. He started playing basketball when he was 14-years-old and its taking him more time. Who cares how long it takes? It’s the point of, can I get to that point where, ‘I’m a significant player’ and he is now.”

Nate Sestina gave the Wildcats a lift with eight points and seven rebounds, his best outing since returning from a fractured wrist injury.

One of the more consistent free-throw shooting teams in the nation, Kentucky was 10-for-20 from the charity stripe.

“Tom (Crean) had them ready as he always does,” Calipari said. “We got (into) foul trouble and this is one of the few teams that has shot more fouls than we have in a game. Not only that, we missed five in a row and we’re one of the best free-throw shooting teams in the country, but we had foul trouble (in the first half). … We won without making free throws and it’s good to know we can do that.”

Georgia standout freshman Anthony Edwards led all scorers with 23 points. The Bulldogs were coming off a 65-62 upset of Memphis Saturday, but couldn’t sustain the momentum against the Wildcats.

“If you give him space, he’s making the shot,” Calipari said of Edwards. “We just tried to crowd him, switch out on him and make it hard for him. He was eight for 17 and that’s good. He made baskets that kept it close.”