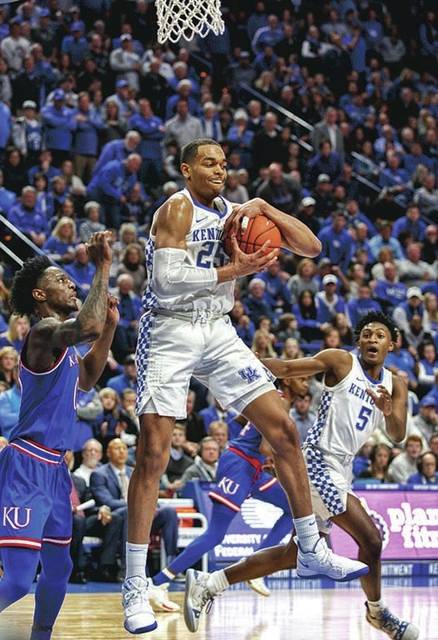 LEXINGTON (KT) — When he’s at his best, PJ Washington is nearly unstoppable. He was a force for Kentucky when the Wildcats needed him the most Saturday night.

Washington had a double-double with 20 points and 13 rebounds to lead the eighth-ranked Wildcats to a 71-63 victory over No. 9 Kansas in the SEC/Big 12 Challenge at Rupp Arena. It was the team’s fifth consecutive victory over a ranked opponent and ended a three-game losing streak to the Jayhawks.

Even before he posted his fifth double-double of the year, Kentucky coach John Calipari sensed a dominating performance from his sophomore forward, something he has been seeking since Washington arrived on campus more than a year and a half ago.

“P.J. had a spirit about him,” Calipari said. “He had a confidence about him. He let the game come (to him). There was no tentativeness to how we play.”

Washington, who posted back-to-back 20-point games for the first time in his career, said the goal was to simply make shots, especially in the second half to overcome the Jayhawks.

“We couldn’t make anything,” he said. “We weren’t making layups, threes, floaters, nothing. We knew that we were going to make shots the second half.”

The inspiring performance by Washington was sparked by a video of Washington’s outing against Mississippi State earlier this week. It wasn’t his scoring or rebounding but rather his quickness that caught Calipari’s attention.

In Calipari’s view, Washington has reached the crossroads and has a decision to make in moving forward, and added the hard part is staying consistent.

“That becomes, what do you want?” Calipari said. “And then when you play that way, the hard thing is, to live up to that and have to do that all the time. Really hard. That’s when you become special where that — you thrive in that environment … I was proud of him today. Hopefully, he’s breaking through.”

Washington wasn’t alone and got some help from teammates Reid Travis and Keldon Johnson. Travis also had double figures in scoring with 18 points and 12 rebounds, while Johnson contributed to the dominating post play with 15 points and 10 boards.

Kansas coach Bill Self said the performances by Washington and Travis proved to be the difference in the showdown between the two powerhouse programs.

“Reid and PJ were the dominant players,” he said. “It was certainly two against one (in the post). They just wore our guy (Dedric Lawson) out.” We basically had one guy ready to go against that (post play) and that’s an awful lot to ask.”

Like Washington, Calipari has been seeking a breakthrough from Travis.

“You saw him play his best when he fights for rebounds and quick jumps and you look and say, why didn’t he play like that all the time?” Calipari said.

Travis and Washington proved to be too much for Kansas in the post.

“Teams can’t really stop both of us,” Washington said. “They have to pick and choose and if they do that, the other one is going to get going. We just have a great feel for (each other).”

Travis added, “I and PJ can play well off each other.”

“It’s going to be a tough battle for teams as far as really trying to guard us both,” he said. “The more we play with each other, our bond is growing, on and off the court. It’s helping us and it’s starting to show in big games and I think it’s definitely something we can use in big games in the future.”

The Wildcats did just that against the Jayhawks and added another signature victory to their resume.

“We don’t know where the ceiling is,” Washington said. “We just gotta keep going every day, just keep working hard and fight each other in practice so we can do that in games.”

In a 72-42 win Thursday at Pineville, the Harlan Green Dragons found the range from the 3-point line with 11... read more