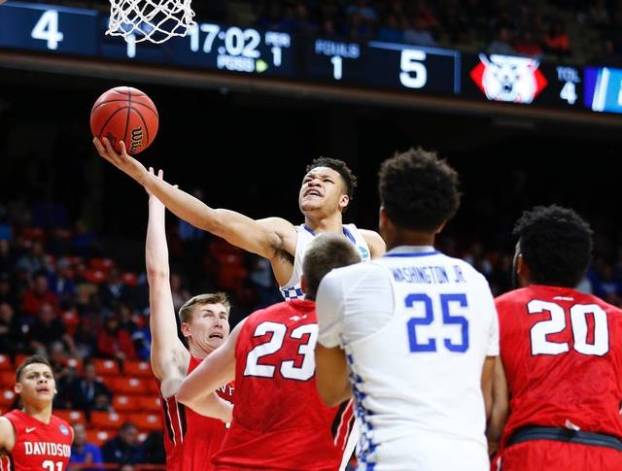 Kevin Knox scored 25 points to lead Kentucky to a 78-73 win over Davidson on Thursday night at Taco Bell Arena in Boise.

Wildcats hang on to edge Davidson

Kentucky (25-10) advanced to the second round of the NCAA Tournament with a 78-73 triumph over outmanned Davidson Thursday night, setting up a potential matchup against Buffalo in the second round Saturday at Taco Bell Arena.

Kentucky coach John Calipari said his team’s performance in the first half was “really good,” but added the final 20 minutes proved to be “shaky.”

“It was a good one for this young team,” Calipari said. “First time they’ve been in the NCAA Tournament, not knowing what to expect. If you come out to play the way we did in the second half, our season will be over. The way they played in the second half, I thought defensively, to play a team that’s as efficient and an execution team like Davidson, this young team did pretty good.”

Kevin Knox scored 25 points to pace the Wildcats, who failed to make a 3-pointer for the first time since defeating Seton Hall in the Great Alaska Shootout in 1988. Kentucky missed all of its six shots from long range against the Wildcats, ending a streak that spanned 1,047 games, the longest in the nation.

Calipari nor Kentucky’s players were aware of the streak coming to a close but just relieved to move on to the next round in the South Region.

“I didn’t know that at all,” Knox said. “We just shoot the shots that were open. They didn’t fall tonight. It’s rare for us not to get a 3-point shot. But yeah, I didn’t know the whole game.”

Kentucky’s goal was to dominate in the post instead of getting into a 3-point shootout against Davidson. The Wildcats made 11 of 33 shots from long range but just led once in the contest. Kentucky outrebounded the Wildcats 36-28 and held Davidson to just five second-chance points.

“That was the game plan,” Kentucky forward Wenyen Gabriel said. “We tried to make it a different kind of game and try to get to the rim. We contested their shots well.”

The Wildcats picked up where they left off following a fourth-straight Southeastern Conference Tournament championship and limited Davidson to just 24 points in the first half, but couldn’t put the Wildcats away in the second half. All but three of Davidson’s 11 shots from long range came during the final 20 minutes.

Davidson connected on five of its first eight 3-pointers to open the second half and tied the score at 54-54 with seven minutes remaining. The Wildcats made 10 of their first 14 shots of the second half to overcome a double-digit deficit.

Shai Gilgeous-Alexander, who scored 29 points in Kentucky’s 77-72 win over Tennessee in the Southeastern Conference finals last weekend, finished with 19 points and missed seven of his first eight shots from the field.

Despite his struggles, Gilgeous-Alexander still made 9-of-10 free throws, including eight straight in the final two minutes to help secure the single-digit victory over a determined Wildcat squad. Gilgeous_Alexander just missed a double-double with eight rebounds and seven assists to go along with five steals.

“My shots weren’t falling,” said Gilgeous-Alexander, who made five field goals on 13 attempts. “I got a little selfishness. I’m going to learn from it and get better for the next game.”

PJ Washington followed Gilgeous-Alexander with 11 points, all of which came in the opening half. Washington played just five minutes in the second half because of foul trouble and fouled out with 48 seconds remaining.

Washington and Knox combined for 20 points in the first half, paced by Washington, who scored 11 points, most of which came on back-door plays underneath. The Wildcats led 34-24 at the break and scored 26 points in the paint. Overall, Kentucky scored 36 points in the post and made several mid-range jumpers, several by Knox in the second half.

“We wanted to get to the rim,” Kentucky forward Hamidou Diallo said. “We didn’t feel like they could guard us.”

Davidson connected on just three treys during the opening half. The Wildcats made just one shot on nine attempts to close the first half and couldn’t overcome a four-minute scoring drought midway through the half.

Diallo wasn’t surprised by Davidson’s ability to stay in the game and added the close encounter was a learning experience.

“No team is ever going to go away, no matter what,” he said. “It’s March and no team wants to go home. The next game coming is going to be big for us, so we have to make sure that we locked in.”