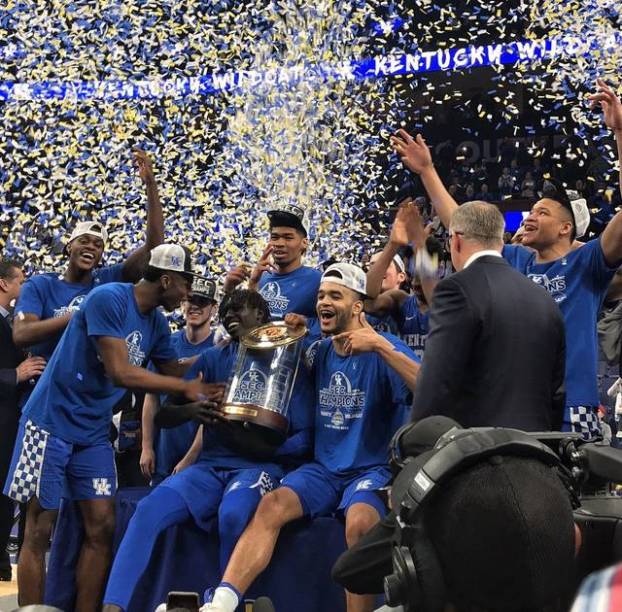 The Wildcats (24-10) captured their fourth straight title with a 77-72 triumph over top-seeded Tennessee Sunday at the Scottrade Center in St. Louis. Kentucky rolled past Georgia and Alabama in its first two games of the tourney but had a harder time with the Volunteers during the final session of the five-day event.

Although a No. 4 seed, the Wildcats made seven of eight free throws in the final 45 seconds to secure their 12th straight league tournament victory, giving Kentucky a dose of momentum going into the NCAA Tournament. Tennessee (25-8) swept the Wildcats during the regular-season but couldn’t overcome an early 17-point deficit in the tournament finale.

“They start the second half and make another run at us, and I’ve got to call a time-out right before the 16- minute mark, and this team responded,” Kentucky coach John Calipari said. “They responded. Every situation and experience is new to them, so you don’t really know what they’re going to do, and we need as many of these kinds of things as we can going into next weekend. So proud of them. Really proud of them.”

“I think right now he’s playing his best basketball because he’s one of our leaders,” Kentucky forward Kevin Knox said. “He knows he’s getting better with the decision-making. Late in the game, he made some huge plays, knocked down some free throws, and found people. He’s also doing it on the defensive end. He’s really good defensively, and he’s playing really well right now.”

Knox followed Gilgeous-Alexander with 18 points, Wenyen Gabriel had 12 and Quade Green chipped in with 10 points. Gilgeous-Alexander and Knox combined for five of Kentucky’s seven 3-pointers in the contest. Knox and Gabriel were named to the all-tournament team.

Admiral Schofield led the Volunteers with 22 points and said the contest was different than the first two games against the Wildcats this season.

On the flip side, Kentucky was glad to avenge the two setbacks.

“(It) definitely felt good for us,” Gabriel said. “I know that it was a big game for us. We got swept in the series this season. Obviously, that was on our mind. But we tried to play with a clear mind, play our hearts out. We were really trying to do this to get ready for the NCAA Tournament. Playing without (Jarred) Vanderbilt, we really had to dig in deep, and I know he was wishing he was on the court with us. “

Tennessee, the SEC regular-season co-champion, along with Auburn, is expected to earn a high seed in the NCAA Tournament.

“That’s a whole new deal,” Tennessee’s Grant Williams said. “It’s not like that was our last game. We have another chance to play, which is an amazing opportunity. So we’ve got to learn from this game, and then after that, just do our job.”

Kentucky also is looking forward to the next step with the rest of the teams in the league.

“I love the fact that we can go on the road and lose a game and not go to the play-in game in Dayton,” Calipari said. “I mean, now you can lose a game. We lost eight games in our league. Eight. Most of them on the road, but we still lost eight. And you know what, we’re still standing. This is how it’s supposed to be.”