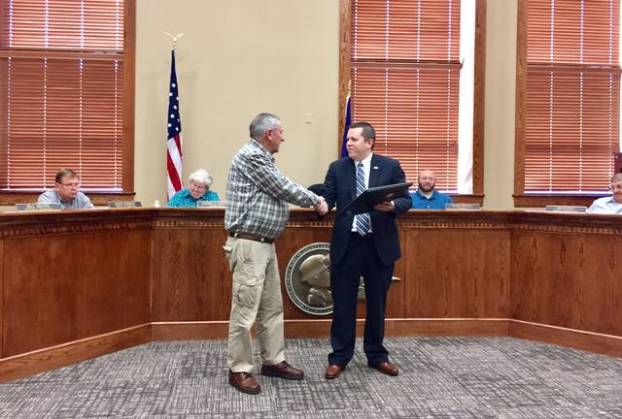 “I would like to say a few words before we do this,” Harlan County Judge-Executive Dan Mosley said. “Bob Lee, who has served on the BMUD board for more than 20 years, has decided to step down.”

Mosley advised Lee served in multiple roles on the BMUD board over the years.

“He’s served either as chairman or as a member of the board for more than two decades,” Mosley said. “He has overseen many, many projects that have taken place within the Black Mountain Utility District, including water line extensions and rehabilitation projects. He’s also been involved in the two mergers that have taken place with BMUD in that time, with Green Hills and Wallins both going in under the BMUD umbrella.”

“You all know people who volunteer to serve on boards in your communities, the key word there is ‘volunteer’,” Mosley said. “They put forth a lot of their time and their own resources into things to see that the boards are sustainable and the job is being done for the citizens of those communities. Bob Lee epitomizes that type of role. I appreciate his service for the communities that BMUD serves.”

Lee is a resident of the Molus community.

“He has been very active in seeing that not only the people at Molus have safe, reliable and clean drinking water, but that the citizens of BMUD’s entire service area has such,” Mosley said. “He’s been an advocate for funding and grants that have supported that district.”

Mosley then read a proclamation honoring Lee for his work with BMUD over the last 20 years.

The Harlan Fiscal Court learned during a meeting on Tuesday the Tri-City Rescue Squad has been dissolved and the organization... read more