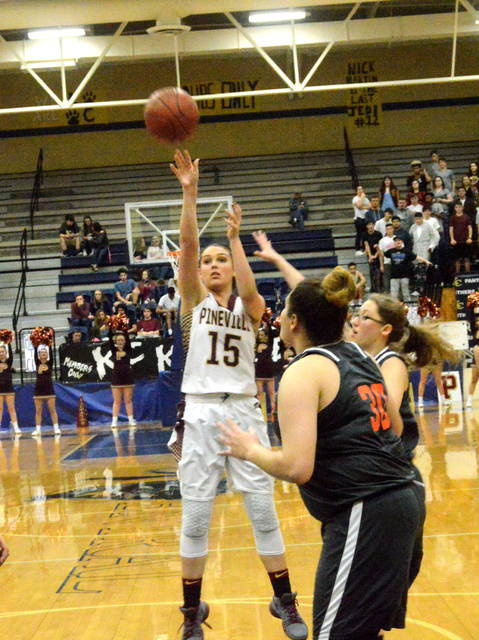 Whitney Caldwell shoots a runner during Pineville’s victory over Lynn Camp on the opening day of the 51st District tournament. The freshman guard finished the night with a game-high 21 points.

In a rematch from last year’s district tournament, Pineville squared off against Lynn Camp on Monday for a chance to advance to the championship and to earn a spot in the 13th Region tournament. Unlike last season, the Lady Lions looked in control for the majority of the game en route to a 66-55 victory over the Lady Wildcats.

With the win, Pineville advances to the 51st District championship against Knox Central on Thursday and has secured a spot in the 13th Region tournament.

“We wanted to get back to the region. We lost in the first round last year…but that’s the reason you play them. You never know,” said Pineville coach Jamie Mills. “I knew this was a different team. They had two starters out the last time we played them, so we knew they were going to be a high energy (team) tonight. We matched it and we played very well from the tip to the finish.”

The Lady Lions grabbed a four-point lead at the end of the first quarter and never trailed from that point forward.

Pineville had four starters end in double figures on the night. Whitney Caldwell paced Pineville throughout the game scoring a game-high 21 points while shooting 46 percent from the field. She also tallied three assists, a rebound and a steal on the night.

Makenzie Fuson shot a team-best 71 percent from the field on her way to 12 points. Sarah Combs tallied five assists to go along with her 10 points.

Pineville jumped out to a 5-0 lead early in the first off a 3-pointer by Combs and a put-back by Raigan King. Lynn Camp used two 3-pointers from Coe to grab a 6-5 lead.

After swapping leads, back-to-back layups from Caldwell gave the Lady Lions an 11-8 lead. Another 3-pointer from Coe cut the lead to one before a put-back by Enix and a 3-pointer by Fuson gave Pineville a 16-11 lead at the end of one.

The Lady Lions extended their lead to double-digits, 21-11, after a basket from Enix and a 3-pointer from Caldwell to open the second.

A 6-0 run later in the quarter would help Lynn Camp cut the lead to four with an and-1 by Coe narrowing the deficit to 23-19.

A free throw and basket from Fuson increased the lead to seven before a layup from Mollie White and a 3-pointer by Coe narrowed the deficit to 26-24. Enix ended the quarter with a free throw and jumper to give the Lady Lions a 29-24 lead heading into halftime.

A Haley Walker 3-pointer opened the third and cut the Pineville lead to 29-27. The Lady Lions answered with a 9-0 run that included 3-pointers from Enix, Combs and Caldwell increasing the lead to 38-27 with 5:53 remaining in the quarter.

Pineville kept the lead in double digits for the majority of the frame with an and-1 by Enix giving the Lady Lions a 53-39 lead heading into the fourth.

Lynn Camp was able to cut the lead to single digits twice in the fourth quarter. The first came off a 3-pointer from Rogers that cut the lead to the lead to 61-53 with under two minutes to play. The second was on a basket from Walker that narrowed the deficit to nine with less than 20 seconds remaining.

Caldwell capped the game with a pair of free throws to secure the 11-point victory for the Lady Lions.

The Harlan Green Dragons gave the Corbin Redhounds a game in the second half, but newly-named Mr. Basketball candidate Andrew... read more