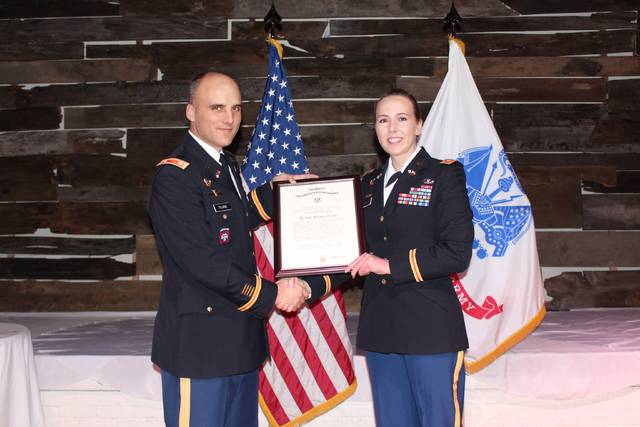 Lt. Col Thomas Tolman administered the oath of office to Lt. Col. Kendra Tippett during a ceremony on Jan. 27 at the Benham School House Inn.

A Harlan County woman was promoted to the rank of Lieutenant Colonel recently, with a ceremony held on Jan. 27.

Kendra T. Tippett, a Cumberland native, took the oath to become a Lieutenant Colonel in the U.S. Army in a special ceremony at the Benham School House Inn. The oath was administered by a longtime friend, Lt. Col. Thomas Tolman.

Tippett is currently serving as the Executive Officer for the Operations Support Division at the Human Resources Command at Ft. Knox. She has served throughout her 17 year career in Iraq, Afghanistan, Uzbekistan, Qatar, Korea, England and several posts within the U.S.

The Tippett family would like to express appreciation to all family and friends and special guests that helped celebrate this most special event. A special thanks to Monte Mullins, her uncle, for the words of comfort with his invocation and to Cassandra Jones, great-great niece, with her beautiful singing of the National Anthem. Also, to Benham School House Inn and staff for hosting the beautiful ceremony. Attending were 75-80 guests and the ones that could not attend….you were deeply missed.