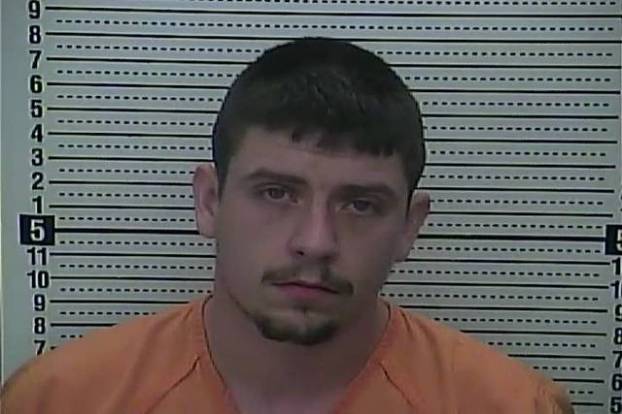 A Wallins man is facing gun and drug charges after police allegedly found him in possession of suspected methamphetamine, suspected marijuana and multiple firearms during a traffic stop.

According to the citation, Wagner observed the 2009 Nissan Altima which Gross was traveling in take an abrupt left turn while traveling down U.S. 119. Wagner then performed a traffic stop. As he approached the vehicle, Wagner noticed Gross moving around awkwardly. Gross reportedly exhibited slurred speech, and his reaction time was slow. Gross told police he had smoked marijuana prior to driving. A search located suspected methamphetamine, suspected marijuana, digital scales, two handguns and a shotgun. One of the handguns, a Glock 9mm, was reported stolen in Middlesboro. Gross stated the meth belonged to him. He was taken to Harlan ARH, where he refused a blood test after being read implied consent.

Gross was charged with improper turning, operating a motor vehicle under the influence of alcohol or drugs, possession of marijuana, possession of drug paraphernalia, first-degree trafficking a controlled substance, carrying a concealed weapon, receiving stolen property (handgun) and illegal possession of a legend drug.

Gross was lodged in the Harlan County Detention Center on a $2,500 full cash bond.

• Justin Cole Caldwell, 18, of Baxter, was arrested on Sunday by Wagner.

Caldwell was charged with second-degree rape (no force) and second-degree sodomy. He was lodged in the Harlan County Detention Center;

• Theodore Fox, 45, of Verda, was arrested by Harlan County Sheriff’s Deputy Dakota Torstrick on Saturday. Fox was charged with possession of a controlled substance and tampering with physical evidence. He was lodged in the Harlan County Detention Center on a $1,000 full cash bond;

• Peggy C. Wynn, 60, of Evarts, was arrested by Harlan County Sheriff’s Deputy Mark Saylor on Saturday on an indictment warrant.

Wynn was indicted for two counts of first-degree trafficking a controlled substance and lodged in the Harlan County Detention Center on a $1,000 unsecured bond.