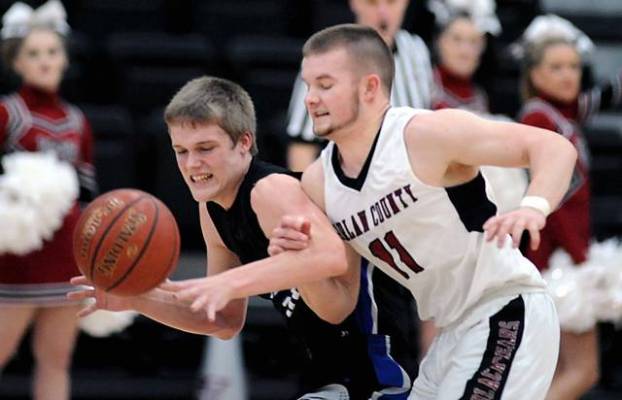 After spending much of the last two nights fighting from behind, the Harlan County Black Bears had chances to win, both Friday at Corbin and Saturday afternoon at home against Scott.

The Black Bears were unable to make the critical play either night and have lost back-to-back games for the first time this season, falling 72-71 to the visitors from the 10th Region in a rematch of last year’s state tournament, which Scott also won on the way to a final four finish.

“We’ve had two situations the last two nights, and those plays didn’t cost us the games, but we’ve worked on those plays. We didn’t attack the basket last night and shot a contested 3. Tonight we got the rebound with six seconds left and instead of attacking the basket we kick it out and shoot a 3,” Harlan County coach Michael Jones said. “It’s not just that though. We’re not executing and our minds are not right out there. We went on a 7-0 run late in the game by attacking the basket, then we shoot two contested 3-pointers. We’re not executing in the right places to get the job done.”

It was a game of runs as Harlan County led by seven in the first quarter before Scott battled back to go up by seven at halftime. Scott led by as many as 10 points in the second half before HCHS battled back, finally taking the lead on two Drew Nolan free throws with 28.9 seconds to play.

Scott coach Steve Frommeyer called two timeouts to set up a shot, the last with nine seconds to play. Nelson Perrin scored on a drive to the basket with six seconds left and drew a foul. Perrin missed the free throw and Nolan grabbed the rebound and drove the length of the court into the paint before kicking the ball out to Taylor Spurlock, who missed a 3-pointer at the buzzer.

Trey Meister scored 21 points to lead the 16-5 Eagles, who won last year’s 10th Region title and are among the top contenders again this season. Chad Ohmer contributed 17 points and Perrin added 15. Nathan Joyce had 12 points and seven rebounds before fouling out.

Senior guard Andrew Creech led the 15-5 Bears with 27 points, hitting 15 of 17 at the line as he took over in the second half with his drives into the paint.

“With our athleticism and speed we want to get out running. Sometimes teams can wall you up and it works for a while, then it doesn’t,” Frommeyer said. “It was a game of runs. That is a very good team, a team that could win the 13th Region. They are very well coached. They were on top of everything we wanted to do. (Creech) exposed our weakness, and he exposed us last year in the state tournament. I don’t know how many points he scored, but he’s good

“He did that last night, bringing us back when we got behind,” Jones said. “He’s playing well offensively and he’s playing well defensively. We just need to get everybody on the same page. We’re having mental breakdowns on the defensive end. They know better and it’s something we’ll keep working to improve.”

Nolan and Alex Pace added 14 and 10 points, respectively, for the Bears.

Senior center Lamar Burkhart had three baskets in the first quarter, including two 3-pointers, as Harlan County led by as many as seven and took a 20-15 advantage into the second period.

Scott’s lead grew to 10 points on two occasions in the third quarter before Pace sparked a comeback with three baskets in the final minutes to pull the Bears within four, at 55-51, going into the final period.

Harlan County will close out its district schedule next week, traveling to Middlesboro on Tuesday and Harlan on Friday for girls/boys doubleheaders.

Even though it’s now almost 10 years old, the Harlan County gym is still impressive to visitors, including Frommeyer.

“No gym in northern Kentucky compares to this gym,” he said. “Most of the 9th Region gyms are really old. The Ellis gym at Holmes is very big, but it’s cavernous and old. Mason County has a lot of tradition in the 10th Region. There is a mystique to it. But you have all these levels here and it just pops right out at you, the black and the maroon. It’s vast and it’s just beautiful.”

WILLIAMSBURG — As two all-staters from a year ago took seats on the bench in street clothes, the Harlan County... read more