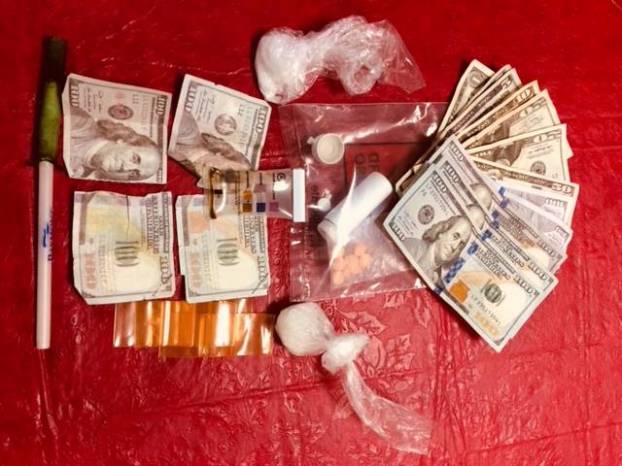 According to a press release, Harlan County Sheriff’s Office deputies were on patrol in an area of Loyall after receiving a drug trafficking complaint. Deputy Dakota Torstrick conducted a traffic stop. Upon making contact, the operator of the vehicle allegedly gave deputies a false name and birth date. Through further investigation, it was determined the operator was Lucas. Methamphetamine was located in his pocket and inside the vehicle. Upon arriving at the detention center, Lucas attempted to discard another bag of methamphetamine and was observed kicking it under a vehicle. Once inside the detention center, an X-ray revealed eight prescription controlled substances concealed on his person. It was also determined that Lucas was wanted for parole violation stemming from drug charges in Sullivan County, Tennessee. Approximately 23 grams of methamphetamine was located along with a social security card that did not belong to Lucas as well as two counterfeit $100 bills. Over $600 was seized and a Ford Mustang was impounded.

Lucas was charged with first-degree trafficking a controlled substance (methamphetamine), operating a motor vehicle under the influence of alcohol or drugs, criminal possession of a forged instrument, theft of identity of another without consent, possession of drug paraphernalia, giving officer false identifying information, failure to maintain insurance, no registration plates, no registration receipt, tampering with physical evidence, first-degree promoting contraband and possession of a controlled substance. Lucas was also served with a fugitive from another state warrant.

He was lodged in the Harlan County Detention Center.

Deputies were assisted at the traffic stop by Loyall and Harlan City Police Departments. The case remains under investigation by Torstrick.

Christ’s Hands is seeking donations to help with the costs of keeping the facility open as an Emergency Winter Shelter... read more