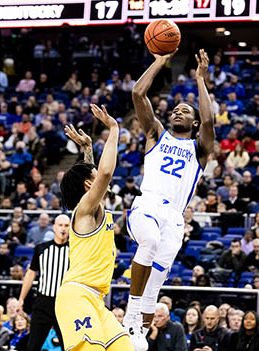 Kentucky made its visit across the pond a memorable one Sunday.

The 19th-ranked Wildcats extended its winning streak to three with a 73-69 triumph over Michigan in London, England, a win Kentucky (6-2) needed to show it could beat teams of the same caliber.

In their first two outings against quality opponents this season, the Wildcats came up short in an 86-77 double overtime loss to Michigan, followed by an 88-72 setback to Gonzaga two weeks ago.

Kentucky found a perimeter shooter it could rely on in clutch moments — Cason Wallace — and another — Antonio Reeves — who can make outside shots with consistency.

“I haven’t slept for three days. I’m up all night right now,” Calipari said after the first regular-season game in Europe for both teams. “I’m worried about our guys going back, but it was a great experience.”

Wallace, the Most Valuable Player in the Hall of Fame London Showcase, drained a 3-pointer with 1:11 remaining that pushed a two-point margin to five and gave Kentucky the cushion it needed to survive a close game, despite missing four free throws in the closing minutes.

The freshman guard finished with 14 points and added eight rebounds, five assists, and one steal in what may be his best outing of the season. He was perfect on all four of his three-point attempts from the field.

Jacob Toppin tied Wallace for team-high scoring honors with 14 points as all five starters finished in double figures. Oscar Tshiebwe held his own on the post against Michigan standout Hunt Dickinson, who finished with 23 points and nine rebounds. Tshiebwe had 13 points and completed a double-double with 14 rebounds.

The Wildcats dominated the boards by a 46-33 margin but need to work on turnovers and free-throw shooting as they inch closer to the Southeastern Conference schedule. Kentucky made just 10 of 20 free throws, struggling to cash in down the stretch.

“We got lucky here,” Calipari said. “We missed free throws again, which is what we did (in a loss) to Michigan State.”