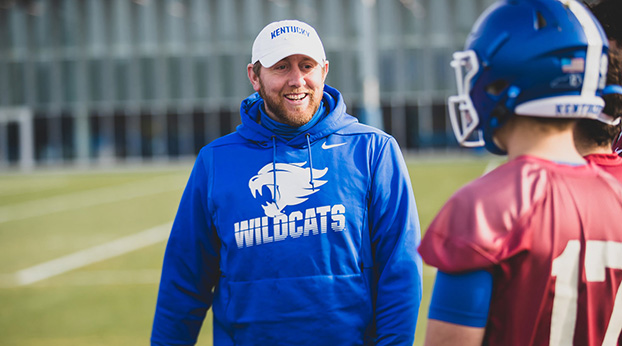 As Kentucky enters its final week of spring workouts, Kentucky football coach Mark Stoops has been pleased with his team’s progress learning and adapting to a new offensive scheme.

“I feel like there’s definitely a lot to build on,” he said. “(I’m) really looking forward to challenging the guys to have a really solid finish to the spring here this week and build on the good things we’re doing and try to get some of these other things cleaned up so we can have a lot of confidence heading into the summer.”

Stoops expects the offensive line to “carry on the tradition” that late John Schlarman built during his tenure as coach of that unit.

“I really feel good about that in the future,” he said. “Then as our offense blossoms, and I know it looked really good out there (Saturday) … I was very excited about it. We’re starting to get that balance that I want.”

Kentucky offensive coordinator Liam Coen called plays from the sideline Saturday, but Stoops isn’t sure where Coen will eventually settle in once the season begins next fall.

“We’ll continue to work through that,” he said. “We will use that communication more than we normally would just because it’s new and new terminology and all that on the offensive side. So we will definitely use it more than just scrimmages. … I do like — even though we’re huddling, which is kind of odd to see in college football anymore — there’s still great tempo and there’s urgency. And I like that. “

Like the rest of his teammates, former Kentucky Mr. Football Wan’ Dale Robinson has been learning the new offense being implemented by Coen.

“Everybody’s different, so it takes time,” Robinson said. “But for the most part, everybody’s getting the offense really, really well, and our coaches are doing a really good job of installing it.”

During Kentucky’s first scrimmage of the spring Saturday, Robinson said the UK offense “played really well” and admitted it was enjoyable being part of a game-type atmosphere instead of the grind of daily drills.

“I think our first couple of drives were some touchdowns and it just felt really good to see our offense in a real game atmosphere and it was very encouraging,” he said. “We were on the sidelines. We just kind of like this, can be this can be really, really good, especially going into the season.

We’re all really excited about it.”

Robinson added the offense featured a mix of “big plays and long touchdowns” in the mock scrimmage.

“We’ve been able to run the ball really well, which helps a lot in the red zone,” he said. “Everything that we’ve put in has really been clicking and working.”

Robinson, who transferred from Nebraska, is happy being closer to home. In addition to the team’s revamped offense, Robinson said he feels “really, really good going into the summer.”